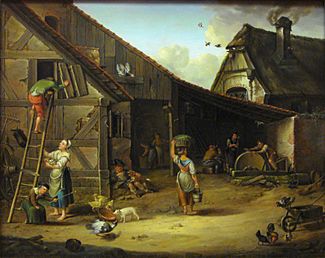 A peasant is a name for a person that worked for others on a farm and never had much money. They usually wore rough clothes and lived in small houses.

The word peasant came from the French word for "country" in the medieval era (15th century). In feudalism peasants, like other farmers, had to be able to do a number of jobs on the farm. They lived in rural areas and made up a large amount of the population. Most peasants could not read or write. They did not usually talk with the higher society unless it was about work. Some were serfs meaning they were not free to leave their lord's land.

All content from Kiddle encyclopedia articles (including the article images and facts) can be freely used under Attribution-ShareAlike license, unless stated otherwise. Cite this article:
Peasant Facts for Kids. Kiddle Encyclopedia.