Emancipation reform of 1861 facts for kids 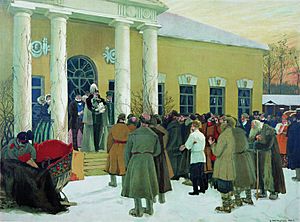 The Emancipation Reform of 1861 in Russia, also known as the Emancipation Edict of Russia, (Russian: Крестьянская реформа 1861 года – "peasants' reform of 1861") was the first and most important of the liberal reforms passed during the reign (1855–1881) of Emperor Alexander II of Russia. The reform effectively abolished serfdom throughout the Russian Empire.

The 1861 Emancipation Manifesto proclaimed the emancipation of the serfs on private estates and of the domestic (household) serfs. By this edict more than 23 million people received their liberty. Serfs gained the full rights of free citizens, including rights to marry without having to gain consent, to own property and to own a business. The Manifesto prescribed that peasants would be able to buy the land from the landlords. Household serfs were the least affected: they gained only their freedom and no land.

All content from Kiddle encyclopedia articles (including the article images and facts) can be freely used under Attribution-ShareAlike license, unless stated otherwise. Cite this article:
Emancipation reform of 1861 Facts for Kids. Kiddle Encyclopedia.