Alphonse Mucha (24 July 1860 – 14 July 1939) was a Czech Art Nouveau painter and decorative artist, best known for his distinct style and his images of women. He produced many paintings, illustrations, advertisements, and designs.

Mucha moved to Paris in 1887, continued his studies, and worked at producing magazine and advertising illustrations.

Around Christmas 1894, Mucha happened to drop into a print shop where there was a sudden and unexpected need for a new advertising poster for a play starring Sarah Bernhardt, the most famous actress in Paris. Mucha volunteered to produce a lithographed poster within two weeks, and on 1 January 1895, the advertisement for the play Gismonda by Victorien Sardou appeared on the streets of the city. It was an overnight sensation and announced the new artistic style and its creator to the citizens of Paris. Bernhardt was so satisfied with the success of this first poster that she entered into a 6-year contract with Mucha. 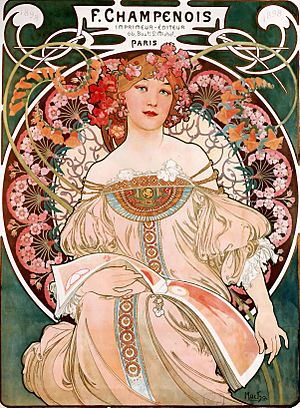 The 1900 Paris Exhibition spread the "Mucha style" abroad, of which Mucha said "I think [the Exposition Universelle] made some contribution toward bringing aesthetic values into arts and crafts." He decorated the Bosnia and Herzegovina Pavilion and collaborated in the Austrian Pavilion.

Mucha's Art Nouveau style was often imitated. The Art Nouveau style however, was one that Mucha attempted to distance himself from. He always insisted that his paintings came purely from within and from Czech art. He declared that art existed only to communicate a spiritual message, and nothing more. He was frustrated at the fame he gained through commercial art, when he most wanted to concentrate on more lofty projects that would ennoble art and his birthplace.

All content from Kiddle encyclopedia articles (including the article images and facts) can be freely used under Attribution-ShareAlike license, unless stated otherwise. Cite this article:
Alphonse Mucha Facts for Kids. Kiddle Encyclopedia.