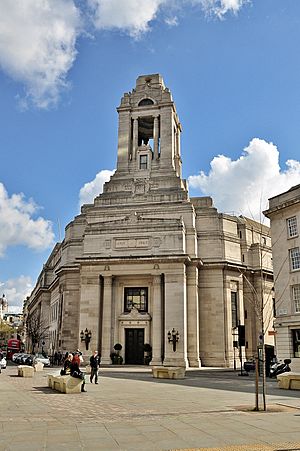 Freemasonry is an organization of people who believe in brotherhood and helping others. Its members are known as "Freemasons" (in full: "Ancient Free and Accepted Masons", or simply "Masons"). Freemasons also help one another in times of hardship. Freemasonry can be found all over the world in various forms. About 6 million people are Freemasons.

The local groups in various countries are known as "lodges". At the State or National level are "Grand Lodges". These are independent of each other. "Regular" Freemasonry is only for men, but there are also co-ed Masonic lodges (and lodges for only Women) that are not recognized as legitimate by the "regular" groups. All of these lodges believe in "brotherly love, relief and truth". They do work for charities such as running schools for orphaned children. There is a Royal Masonic Hospital which is a home for old members and their families.

The word mason means a man who works with stone. He is also called a "stonemason". Freemasonry grew from the groups (guilds) of stonemasons in the Middle Ages. These men were building cathedrals and other big buildings. They were called freemasons because they were free, they were not servants who belonged to a rich lord, like many workers were in those days. They often changed jobs and moved about from one town to another. In this way they were different from other craftsmen who often worked in one place and had guilds in one town. The stonemasons tried to keep their skills secret so that only they knew how to do their job. This is probably why the Freemasons have hand shakes and passwords that they swear to keep secret.

Freemasonry is controversial. It has been opposed on two grounds. The Catholic Church opposes Freemasonry, although Freemasonry itself does not block Catholics. The second is political. In Britain the Labour Party has advocated laws restricting Masonry.

All content from Kiddle encyclopedia articles (including the article images and facts) can be freely used under Attribution-ShareAlike license, unless stated otherwise. Cite this article:
Freemasonry Facts for Kids. Kiddle Encyclopedia.