Suffolk is an East Anglian county of historic origin in England. It has borders with Norfolk to the north, Cambridgeshire to the west and Essex to the south. The North Sea lies to the east. The county town is Ipswich; other important towns include Lowestoft, Bury St Edmunds, Newmarket and Felixstowe, one of the largest container ports in Europe.

The county is low-lying with very few hills, and is largely arable land with the wetlands of the Broads in the north. The Suffolk Coast and Heaths are an Area of Outstanding Natural Beauty.

By the fifth century, the Angles (after whom East Anglia and England are named) had established control of the region. The Angles later became the "north folk" and the "south folk", from which developed the names "Norfolk" and "Suffolk". Suffolk and several adjacent areas became the kingdom of East Anglia, which later merged with Mercia and then Wessex.

Suffolk was originally divided into four separate Quarter Sessions divisions. In 1860, the number of divisions was reduced to two. The eastern division was administered from Ipswich and the western from Bury St Edmunds. Under the Local Government Act 1888, the two divisions were made the separate administrative counties of East Suffolk and West Suffolk; Ipswich became a county borough. A few Essex parishes were also added to Suffolk: Ballingdon-with-Brundon and parts of Haverhill and Kedington.

On 1 April 1974, under the Local Government Act 1972, East Suffolk, West Suffolk, and Ipswich were merged to form the unified county of Suffolk. The county was divided into several local government districts: Babergh, Forest Heath, Ipswich, Mid Suffolk, St. Edmundsbury, Suffolk Coastal, and Waveney. This act also transferred some land near Great Yarmouth to Norfolk. As introduced in Parliament, the Local Government Act would have transferred Newmarket and Haverhill to Cambridgeshire and Colchester from Essex; such changes were not included when the act was passed into law.

Beginning in February 2008, the Boundary Committee again reviewed local government in the county, with two possible options emerging. One was that of splitting Suffolk into two unitary authorities – Ipswich and Felixstowe and Rural Suffolk; and the other, that of creating a single county-wide controlling authority – the "One Suffolk" option. In February 2010, the then-Minister Rosie Winterton announced that no changes would be imposed on the structure of local government in the county as a result of the review, but that the government would be: "asking Suffolk councils and MPs to reach a consensus on what unitary solution they want through a countywide constitutional convention". Following the May 2010 general election, all further moves towards any of the suggested unitary solutions ceased on the instructions of the incoming Coalition government, and the administrative structures of the county are, therefore, unchanged.

West Suffolk, like nearby East Cambridgeshire, is renowned for archaeological finds from the Stone Age, the Bronze Age, and the Iron Age. Bronze Age artefacts have been found in the area between Mildenhall and West Row, in Eriswell and in Lakenheath. Many bronze objects, such as swords, spearheads, arrows, axes, palstaves, knives, daggers, rapiers, armour, decorative equipment (in particular for horses), and fragments of sheet bronze, are entrusted to St. Edmundsbury heritage service, housed at West Stow just outside Bury St. Edmunds. Other finds include traces of cremations and barrows.

In the east of the county is Sutton Hoo, the site of one of England's most significant Anglo-Saxon archaeological finds, a ship burial containing a collection of treasures including a Sword of State, gold and silver bowls, and jewellery and a lyre. 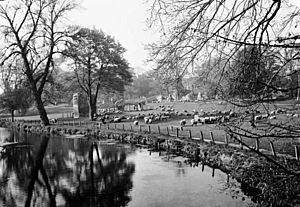 See also: List of settlements in Suffolk by population and Geology of Suffolk

There are several towns in the county with Ipswich being the largest and most populous. At the time of the 2011 census, a population of 730,000 lived in the county with 133,384 living in Ipswich. The table below shows all towns with over 20,000 inhabitants.

Located in the East of England, much of Suffolk is low-lying, founded on Pleistocene sand and clays. These rocks are relatively unresistant and the coast is eroding rapidly. Coastal defences have been used to protect several towns, but several cliff-top houses have been lost to coastal erosion and others are under threat. The continuing protection of the coastline and the estuaries, including the Blyth, Alde and Deben, has been, and remains, a matter of considerable discussion.

The coastal strip to the East contains an area of heathland known as "The Sandlings" which runs almost the full length of the coastline. Suffolk is also home to nature reserves, such as the RSPB site at Minsmere, and Trimley Marshes, a wetland under the protection of Suffolk Wildlife Trust.

The west of the county lies on more resistant Cretaceous chalk. This chalk is responsible for a sweeping tract of largely downland landscapes that stretches from Dorset in the south west to Dover in the south east and north through East Anglia to the Yorkshire Wolds. The chalk is less easily eroded so forms the only significant hills in the county. The highest point in the county is Great Wood Hill, the highest point of the Newmarket Ridge, near the village of Rede, which reaches 128 metres (420 ft).

The county flower is the oxlip.

According to estimates by the Office for National Statistics, the population of Suffolk in 2014 was 738,512, split almost evenly between males and females. Roughly 22% of the population was aged 65 or older, and 90.84% were "White British".

Historically, the county's population has mostly been employed as agricultural workers. An 1835 survey showed Suffolk to have 4,526 occupiers of land employing labourers, 1,121 occupiers not employing labourers, 33,040 labourers employed in agriculture, 676 employed in manufacture, 18,167 employed in retail trade or handicraft, 2,228 'capitalists, bankers etc.', 5,336 labourers (non-agricultural), 4,940 other males aged over 20, 2,032 male servants and 11,483 female servants. The same publication records the total population of the county at 296,304.

Most English counties have nicknames for people from that county, such as a Tyke from Yorkshire and a Yellowbelly from Lincolnshire; the traditional nickname for people from Suffolk is 'Suffolk Fair-Maids', or 'Silly Suffolk', referring respectively to the supposed beauty of its female inhabitants in the Middle Ages, and to the long history of Christianity in the county and its many fine churches (from Anglo-Saxon selige, originally meaning holy).

The Suffolk dialect is distinctive.

The county's sole professional football club is Ipswich Town. Formed in 1878, the club were Football League champions in 1961–62, FA Cup winners in 1977–78 and UEFA Cup winners in 1980–81. Ipswich Town currently play in the Football League Championship – the next highest ranked team in Suffolk is Lowestoft Town who participate in the Conference North, followed by Bury Town and Leiston of the Isthmian League Premier Division, one division below Lowestoft.

The town of Newmarket is the headquarters of British horseracing – home to the largest cluster of training yards in the country and many key horse racing organisations including the National Stud, and Newmarket Racecourse. Tattersalls bloodstock auctioneers and the National Horseracing Museum are also in the town. Point to point racing takes place at Higham and Ampton.

Speedway racing has been staged in Suffolk since at least the 1950s, following the construction of the Foxhall Stadium, just outside Ipswich, home of the Ipswich Witches. The Witches are currently members of the Premier League, the UK's second division. National League team Mildenhall Fen Tigers are also from Suffolk. 'Casper' from the Edinburgh Monarchs speedway squad was also a native of Suffolk for a brief period in the 1970s.

Suffolk C.C.C. compete in the Eastern Division of the Minor Counties Championship. The club has won the championship three times outright and has shared the title one other time as well as winning the MCCA Knockout Trophy once. Home games are played in Bury St Edmunds, Copdock, Exning, Framlingham, Ipswich and Mildenhall.

Founded in 1948 by Benjamin Britten, the annual Aldeburgh Festival is one of the UK's major classical music festivals. Originating in Aldeburgh, it has been held at the nearby Snape Maltings since 1967. Since 2006, Henham Park, has been home to the annual Latitude Festival. This mainly open-air festival, which has grown considerably in size and scope, includes popular music, comedy, poetry and literary events. The FolkEast festival is held at Glemham Hall in August and attracts international acoustic, folk and roots musicians whilst also championing local businesses, heritage and crafts. In 2015 it was also home to the first instrumental festival of musical instruments and makers. More recently, LeeStock Music Festival has been held in Sudbury.

Novels set in Suffolk include parts of David Copperfield by Charles Dickens, The Fourth Protocol, by Frederick Forsyth, Unnatural Causes by P.D. James, Dodie Smith's The Hundred and One Dalmatians, The Rings of Saturn by W. G. Sebald, and among Arthur Ransome's children's books, We Didn't Mean to Go to Sea and Coot Club. Roald Dahl's short story The Mildenhall Treasure is set in Mildenhall. ory

A TV series about a British antiques dealer, Lovejoy, was filmed in various locations in Suffolk. The reality TV Series Space Cadets was filmed in Rendlesham Forest, although the producers fooled participants into believing that they were in Russia. Several towns and villages in the county have been used for location filming of other television programmes and cinema films. These include the BBC Four TV series Detectorists, an episode of Kavanagh QC, and the films Iris and Drowning by Numbers.

The Rendlesham Forest Incident is one of the most famous UFO events in England and is sometimes referred to as "Britain's Roswell".

The song "Castle on the Hill" by singer-songwriter Ed Sheeran was referred to by him as "a love letter to Suffolk", with lyrical reference to his hometown of Framlingham and Framlingham Castle.

All content from Kiddle encyclopedia articles (including the article images and facts) can be freely used under Attribution-ShareAlike license, unless stated otherwise. Cite this article:
Suffolk Facts for Kids. Kiddle Encyclopedia.