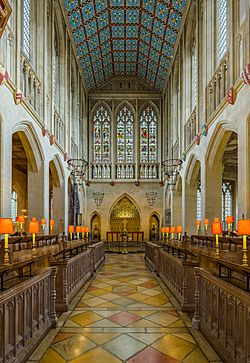 The choir, looking east towards the high altar

A church has stood on the site of the cathedral since at least 1065, when St Denis's Church was built within the precincts of Bury St Edmunds Abbey. In the early 12th century the Abbot, Anselm had wanted to make a pilgrimage along the Way of St James to Santiago de Compostela. He was unsuccessful and instead rebuilt St Denis's and dedicated the new church to Saint James, which served as the parish church for the north side of Bury St Edmunds. Anselm was also responsible for building the abbey gate tower, known today as the Norman Tower, alongside St James's, which also served as the church's belfry and it continues in this function to the present day.

This church was largely rebuilt, starting in 1503, in the Perpendicular style by John Wastell, a master mason who also worked on King's College, Cambridge. Further alterations to the building were undertaken in the 18th and 19th centuries, notably a new chancel and a hammerbeam roof by George Gilbert Scott. When the Diocese of St Edmundsbury and Ipswich was created in 1914, St James's Church was made the cathedral. In 1959 Benjamin Britten wrote the Fanfare for St Edmundsbury for a "Pageant of Magna Carta" held in the cathedral grounds.

From 1959 onwards there was renewed building work designed to transform the former parish church into a cathedral building. Between 1959 and 1970, the Victorian chancel was demolished and replaced with a new quire, a cloister was added on the west side; also transepts, a Lady chapel and a side chapel dedicated to St Edmund were built. The cathedral architect from 1943 to 1988 was Stephen Dykes Bower and he left £2 million for the completion of the cathedral. In the cathedral grounds a new choir school and visitor's centre, which were opened in 1990, were built by Dykes Bower's successor, Alan Rome. Work started on a Gothic revival style tower in 2000; funded by the Millennium Commission, the Stephen Dykes Bower Trust and others, the Millennium Tower was designed by Hugh Mathew, an associate of Dykes Bower. The 150 foot (46 metre) structure was built from 600,000 bricks and faced with Barnack and Clipsham stone. Its completion was officially celebrated on 22 July 2005. Further additions are the Chapel of the Transfiguration and the East Cloister, both completed in 2009, and the Crypt Treasury in 2012.

The font was designed in 1870 by George Gilbert Scott, constructed on a medieval shaft, with a cover by Frank Ernest Howard of Oxford. The decoration was added in 1960. A painting, "The Martyrdom of St Edmund" by Brian Whelan hangs in the Lady Chapel. A sculpture by Elizabeth Frink entitled Crucifixion stands by the Treasury steps. Stained glass in the cathedral includes the medieval Susanna Window which has Flemish glass in the lower section and English glass at the top. The west window depicts the Last Judgement and dates from about 1900.

In addition to guided tours of the cathedral itself, visitors can view changing exhibits of art in the Edmund Gallery, and an exhibit of historic and religious regalia and artefacts in the Cathedral Treasures display.

The Dean of St Edmundsbury is the head (primus inter pares — first among equals) and chair of the chapter of canons, the ruling body of the cathedral. Before 2000 the post was designated as a provost, which was then the equivalent of a dean at most English cathedrals. The first provost was John Orpen. 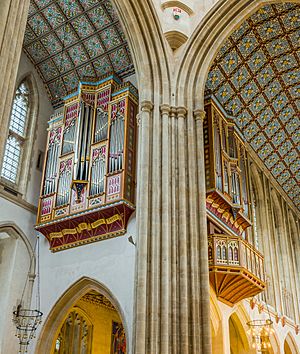 The two organ cases, in the north transept and north choir

The Organ was rebuilt by Harrison and Harrison in 2010; Details of the organ from the National Pipe Organ Register

A peal of 12 bells are located in the Norman Tower. The original ten bells were cast in 1785 by Thomas Osborn of Downham Market. In 1973 the bells were rehung in an iron frame at a lower level in the tower. Following a public appeal, a further two bells were added at Easter 2012. A thirteenth bell was added in 2013 which allows beginners to practice with a full octave, without having to use the three heaviest bells. The bells are rung on Sundays before the morning and evening services, and also for weddings and other special occasions.

All content from Kiddle encyclopedia articles (including the article images and facts) can be freely used under Attribution-ShareAlike license, unless stated otherwise. Cite this article:
St Edmundsbury Cathedral Facts for Kids. Kiddle Encyclopedia.