King's was founded in 1441 by Henry VI, soon after he had founded its sister college in Eton. However, the King's plans for the college were disrupted by the Wars of the Roses and resulted in scarce funds. Little progress was made on the project until in 1508 Henry VII began to take an interest in the college. The building of the college's chapel, began in 1446 and was finally finished in 1544 during the reign of Henry VIII.

King's College Chapel, Cambridge is regarded as one of the greatest examples of late Gothic English architecture. It has the world's largest fan vault, and the chapel's stained-glass windows and wooden chancel screen (the space around the altar) are considered some of the finest from their era.

The chapel's choir, composed of male students at King's and choristers from the nearby King's College School, is one of the most accomplished and renowned in the world. Every year on Christmas Eve the Festival of Nine Lessons and Carols is broadcast from the chapel to millions of listeners worldwide. 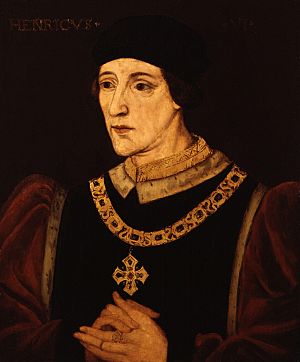 Originally, the college was just for boys from Eton College. It was not until 1865 that other people could study there. The first women students arrived at King's in 1972. The college, along with most others at the university, had been all-male since its foundation. Once someone has been admitted to the college, he or she becomes a member for life. Alumni of the college include; prime ministers, archbishops, presidents and academics.

Although building began in 1441, the project was interrupted by wars and it was not until 1544 that the inside was finished. By this time King Henry VIII was King of England.

Henry VI is still remembered at the College: each year, on the Saturday after the end of Autumn Term is Founder's Day. It begins with a service in the chapel. This is followed by a Founder's Breakfast with ale and finally a big dinner called "Founder's Feast" to which all members of College in their last year of studies are invited. 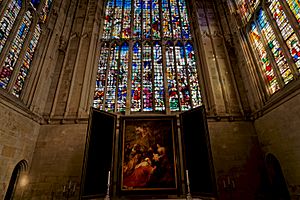 The College Chapel is built in the style of late Gothic architecture. It was built over a period of a hundred years (1446–1531) in three stages. Many concerts and college events take place here. The choir sings services on most days in term-time, and also performs concerts and makes recordings and broadcasts. Every Christmas it sings the service called Nine Lessons and Carols which is shown on BBC television as well as heard on the radio.

On 1 September 1939, the day of the German invasion of Poland and the cause of the UK's entrance into World War II, permission was sought from the College Council to remove the stained glass from the east window of the chapel. By the end of 1941, all the ancient glass had been removed to various cellars in Cambridge for safe keeping. 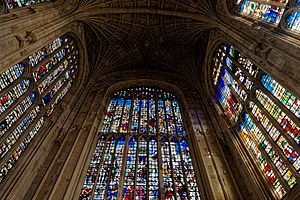 Despite most of the windows of the chapel being covered over by sheets of tar-paper which rattled loudly in the wind, the Festival of Nine Lessons and Carols continued to be broadcast from the chapel every Christmas Eve throughout the war – even though the name of the college could not be broadcast for security reasons. King's took the opportunity of these years to clean, repair and photograph the glass. By 1949, all the windows had been restored.

The Chapel is so famous that it is seen as a symbol of Cambridge, and appears on the logo of the city council. 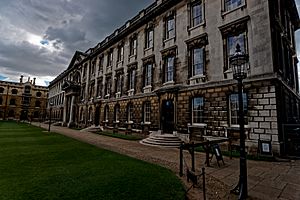 Traditionally students have come from independent schools (public schools), but today the college has gradually started to include many students from state schools. Nearly all subjects that can be studied at Cambridge can be studied at King's. There is a big library which includes some rare books and manuscripts.

King's has a number of competitive and casual sports clubs. King's College Boat Club has the largest active membership of any club in King's. 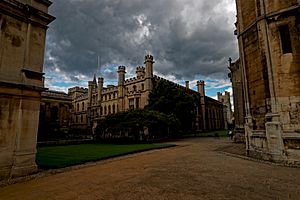 There are a number of rooms around college which students can book out to hold society events. Societies who commonly do this include King's Politics, The Turing Maths Society, The History Society, The Marxist Society, Keynes Economics Society and King's Feminist Society.

The main bar at King's is the site of many social events, open mic nights, and informal meetings and debates between students, whilst a venue known as the Bunker (formerly the Cellar), a second bar in a basement of the college, acts occasionally as a music or dance-night venue and most recently the set for a King's Drama production, and a series of monologue showcase events. Even more recently, the Bunker has been used by the King's Electronic Music Society, allowing students to learn how to DJ.

All content from Kiddle encyclopedia articles (including the article images and facts) can be freely used under Attribution-ShareAlike license, unless stated otherwise. Cite this article:
King's College, Cambridge Facts for Kids. Kiddle Encyclopedia.