A chapel is a place for Christian worship. The word is used in several different ways. Generally, a chapel is a place of worship that is not a church which belongs to a parish in a village or town, but is more private or has a special purpose. 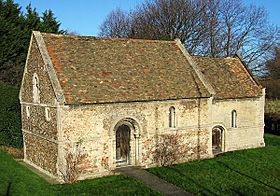 This chapel near Cambridge in England was built in the 1100s as a place for people with Leprosy to worship, as they were not welcome in the other churches.

Some large houses and palaces have their own private chapel where the family and the servants of the house can worship.

Usually these chapels are small. As well as being used for prayers, the chapel might also hold the graves of members of the family, or else have memorials and statues around the walls.

Famous small family chapels are at Haddon Hall in Derbyshire and in the Riccardi Medici Palace in Florence. This small chapel has famous frescoes of the Three Kings by Benozzo Gozzoli. 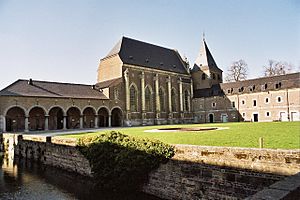 The Chapel at the Castle of Alden Biesen

Some private chapels are as large as very large churches. Because these large chapels can only be built by very rich people, they often have magnificent architecture or very rich decoration.

Some of the most famous large private chapels are St. George's Chapel at Windsor Castle, the Chapel Royal at Versailles Palace and the Sistine Chapel at the Vatican Palace. The Sistine Chapel is the chapel of the popes and is famous for its ceiling painted by Michelangelo. 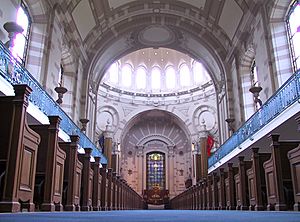 Many universities, colleges, schools, law courts, hospitals and prisons have their own chapels. These might be a grand and beautiful building like the Eton College Chapel, or just a small room that is set aside for prayer.

At many schools, Chapel Service is an important part of the week, when the whole school gets together to pray and to sing hymns. Sometimes a big important church or cathedral might also act as a chapel. Oxford Cathedral is the chapel for Christ Church College of the University of Oxford. St. Andrew's Cathedral, Sydney acts as the chapel to 900 pupils of the cathedral school.

A monastery or a convent generally has a chapel where the monks or nuns can worship. This might be a private chapel, just the right size for the people at the monastery, or it might be a big church that serves a village or town as well, or even a cathedral for the whole region.

Many cathedrals show evidence that they were once used by monks as well as the town people. One of the signs is a large stone screen that divides the church into two areas. Often these churches have a lot of small chapels because the monks or nuns would each say private prayers in one of the small chapels every day. 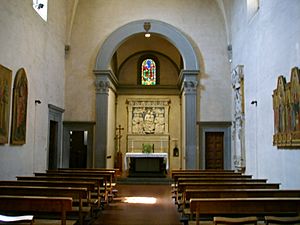 The Medici family chapel at the Church of Santa Croce, Florence.

Whatever the reason might be, there are a great number of family chapels attached to old churches, all over Europe. The Church of Santa Croce in Florence is famous for its many chapels named after important Florentine families. One of the most famous chapels of this type is the one built by Henry VIII to bury his father at Westminster Abbey. 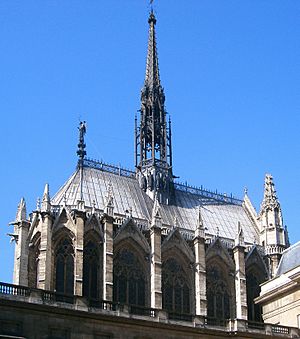 Sainte Chapelle was built in a royal palace to house the Crown of Thorns.

Many chapels have a special purpose in the church. One of the most important uses for a small chapel within a church is to store the Sacrament, the wine and bread or wafer which is used for Holy Communion. Some chapels are designed to remind worshippers of a particular part of the Life of Christ, particularly the Crucifixion or Resurrection, or celebrate a certain Feast Day in the Church Year, such as the Assumption of the Virgin.

Other chapels might hold the relics of a saint or a precious painting or statue of a particular saint such as Saint Anthony of Padua, Saint Francis of Assisi or Saint Patrick.

It is usual for the armed services and other similar organisations to have special chapels at churches or cathedrals.

Most cathedrals have a chapel especially to remember local people who have served their country and perhaps died in a war. The chapel might have the colours or flags of the local regiment. Services may be held regularly, or on special days to remember a particular battle or a particular hero. 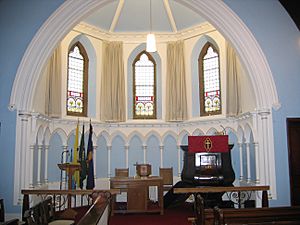 In many Protestant churches, the places where people gather for prayer and services are called chapels rather than churches. This is sometimes because the pastors of the congregation were not accepted as priests by the Roman Catholic or Anglican churches, or because they were set up in places where there was no priest to take services. 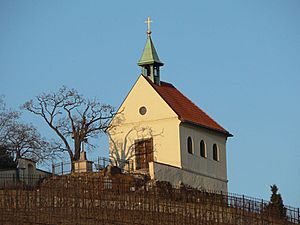 These are chapels built specially for the use of travellers who can drop in as they are passing by. They may be found in busy market places, deep in forests, on lonely mountain roads, and nowadays, at airports. 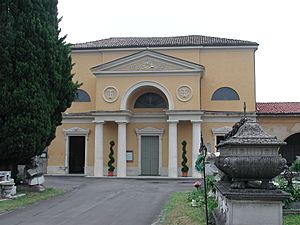 A chapel in a cemetery in Reggio Emilia, Italy.

These chapels are found at cemeteries. Sometimes they are owned by a particular family and contain the tombs of family members, but in most large modern cemeteries the chapels are multi-denominational, meaning that they are for people of different Christian churches, and are used specifically for funeral services.

All content from Kiddle encyclopedia articles (including the article images and facts) can be freely used under Attribution-ShareAlike license, unless stated otherwise. Cite this article:
Chapel Facts for Kids. Kiddle Encyclopedia.