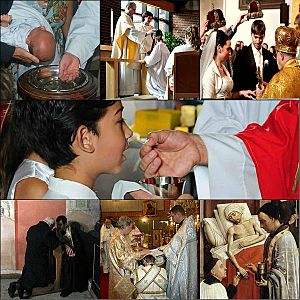 The seven sacraments of the Catholic church.

Sometimes Sacrament can stand for Eucharist

In Christianity, a sacrament is a special rite. It is a visible token of the reality of God.

Sacraments in the Catholic Church

The Roman Catholic Church knows seven such sacraments. These are

Following Martin Luther's tradition, many Protestant churches see only Baptism and Eucharist as Sacraments. They also have most of the other rites, but do not consider them to be sacraments.

Eastern Orthodox and Oriental Orthodox Churches basically have the same views as the Roman Catholic Church. They say however, that many things the church does (as church), can be seen as sacraments, in some way.

All content from Kiddle encyclopedia articles (including the article images and facts) can be freely used under Attribution-ShareAlike license, unless stated otherwise. Cite this article:
Sacrament Facts for Kids. Kiddle Encyclopedia.