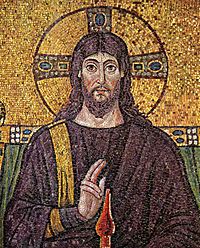 The sign of the cross is a physical gesture made by Catholic and Orthodox Christians, and sometimes also Protestants. It is usually done at the start and end of prayers.

In the Catholic tradition, the right hand goes from the forehead, to the chest, and then to the left and right shoulders (the order of shoulders does not matter). This is sometimes done while saying "Father, Son, Holy Spirit."

In the Orthodox tradition, the tips of the thumb and the middle and index fingers are put together, and the ring finger and little finger are put against the palm. The first three fingers are for faith in the Trinity, and the other two fingers are for the two natures of Jesus, divine and human.

All content from Kiddle encyclopedia articles (including the article images and facts) can be freely used under Attribution-ShareAlike license, unless stated otherwise. Cite this article:
Sign of the cross Facts for Kids. Kiddle Encyclopedia.