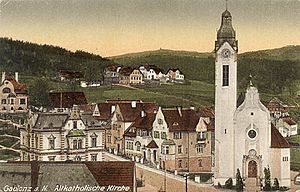 The Old Catholic Church is a name for a group of Christian churches. Most of them are from German-speaking countries. Their beliefs are close to that of the Anglican Church.

They split from the Roman Catholic Church in the 1870s. This was because the First Vatican Council had said the pope was infallible. The Council was from 1869 to 1870. The word Old Catholic was first used in 1853 for the See of Utrecht (who was not under the authority of the pope). Usually, these churches are part of the Union of Utrecht.

All content from Kiddle encyclopedia articles (including the article images and facts) can be freely used under Attribution-ShareAlike license, unless stated otherwise. Cite this article:
Old Catholic Church Facts for Kids. Kiddle Encyclopedia.