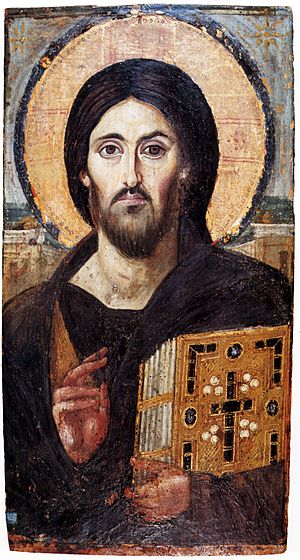 The oldest known icon of Christ Pantocrator – Saint Catherine's Monastery. The halo is a representation of the divine Logos of Christ, and the two different facial expressions on either side emphasize Christ's dual nature as both divine and human.

In Christianity, the Christ ( Greek: Χριστός) is a title for the savior and redeemer who would bring salvation to the Jewish people and mankind. Christ is the Greek translation of the Hebrew title Messiah (Hebrew: מָשִׁיחַ; anointed one), the figure promised by God to the Jewish people and mankind for the salvation of the world. Christians believe that Jesus of Nazareth is the Jewish Messiah called Christ of the Christian Old Testament and fufilled the messianic prophecies of Christian tradition. Christ, used by Christians both as a name and as a title, is synonymous with Jesus.

The area of Christian theology called Christology is primarily concerned with the nature and person of Jesus Christ as recorded in the canonical gospels and the letters of the New Testament. 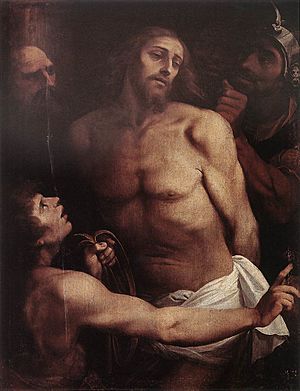 See also: Names and titles of Jesus in the New Testament and Holy Name of Jesus

The word Christ (and similar spellings) appears in English and in most European languages. In modern and ancient usage, even in secular terminology, "Christ" usually refers to Jesus.

Christ and salvation in Christianity 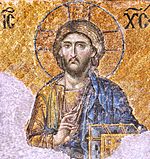 Mosaic of Christ Pantocrator with the Christogram IC XC

"She will bear a son, and you shall call his name Jesus, for he will save his people from their sins." — In Matthew 1:21 the name Jesus was selected by Divine direction.

In Colossians 1:15–16 Apostle Paul viewed the Nativity of Jesus as an event of cosmic significance which changed the nature of the world by paving the way for salvation.

All content from Kiddle encyclopedia articles (including the article images and facts) can be freely used under Attribution-ShareAlike license, unless stated otherwise. Cite this article:
Christ Facts for Kids. Kiddle Encyclopedia.