Parable of the Prodigal Son facts for kids 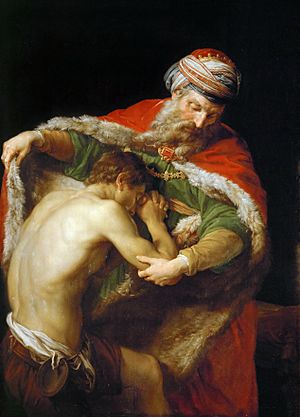 The Return of the Prodigal Son (1773) by Pompeo Batoni

The Parable of the Prodigal Son is one of the parables of Jesus. It is found only in the Gospel of Luke at 15:11-32. The parable is about a son who wastes his share of his father's estate. He loses all his money and gets work feeding pigs—one of the lowest jobs a person can do according to the Jewish religion. He repents and returns to his father's house. He is welcomed and a feast is held. His older, dutiful brother who has worked without reward for his father resents the fuss made over the prodigal son. His father reminds him that all he has is his. He says they should still celebrate the return of the younger boy because he has come back to them. In the Western Catholic church, this parable is usually read on the third Sunday of Lent. In the Eastern Orthodox Church it is read on the Sunday of the Prodigal Son. The parable is the subject of much art, music, literature, and stage works.

This is the last of three parables about loss and redemption. It follows the Parable of the Lost Sheep and the Parable of the Lost Coin. Jesus tells this parable after the Pharisees and religious leaders accuse him of welcoming and eating with "sinners." The father's joy described in the parable reflects divine love, the "boundless mercy of God," and "God's refusal to limit the measure of his grace."

All content from Kiddle encyclopedia articles (including the article images and facts) can be freely used under Attribution-ShareAlike license, unless stated otherwise. Cite this article:
Parable of the Prodigal Son Facts for Kids. Kiddle Encyclopedia.