The Cathedral of St. John the Baptist is the mother church of the Roman Catholic Diocese of Charleston, located in Charleston, South Carolina. Designed by Brooklyn architect Patrick Keely in the Gothic Revival style, it opened in 1907. The Most Reverend Robert E. Guglielmone, D.D., the thirteenth Bishop of Charleston, was ordained and installed on March 25, 2009. 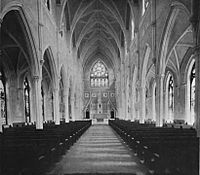 The first brownstone cathedral was built in 1854 and named the Cathedral of Saint John and Saint Finbar. It burned in a great fire in December 1861. The rebuilt cathedral was named for St. John the Baptist and was constructed on the foundations of the earlier structure. Architect Patrick Keely designed both the original cathedral and its replacement.

The Cathedral seats 720 people and is noted for its Franz Mayer & Co. stained glass, hand–painted Stations of the Cross, and neo-gothic architecture. The cornerstone was laid in 1890, and the church opened in 1907. The spire was not built at the time due to the lack of funds during the construction of the cathedral and its numerous renovations. The church was finally completed on March 25, 2010, with the addition of the steeple and bells.

For earlier bishops see List of Bishops of Charleston.

Rectors of the Cathedral

In 2007, Bishop Robert J. Baker and Cathedral Rector Rev. Msgr. Joseph Roth announced plans to renovate and complete the cathedral nearly one-hundred years after it opened. The stained-glass windows were refurbished in December 2007. The brownstone has been refurbished, the mortar has been replaced and, after 103 years of waiting, a spire with 3 bells now tops the Cathedral. A $6.2 million contract for restoration and the steeple addition was completed on March 25, 2010. 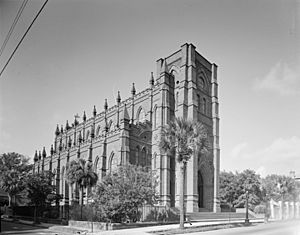 The Cathedral with its new spire is the seventh tallest building in the city. The spire is covered in copper lattice and is topped with a 16x9 foot gilded copper Celtic cross. The arches below were fabricated from a special fiberglass used in ship building, which was then clad in copper. The arches are decorated by brown cast stone pinnacles on each corner. The belfry section is also constructed of brown cast stone. It has copper louvers. The new spire was designed by Glenn Keyes Architects using a sketch of the steeple from the original 1851 building. 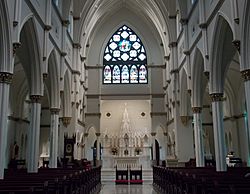 The bells were placed in the Cathedral tower on November 16, 2009. Together the three bronze bells form an E major chord. These bells were cast by Christoph Paccard Bell Foundry in Charleston, South Carolina and blessed by Bishop Robert E. Guglielmone on October 15, 2009.

The Cathedral is noted for its Franz Mayer & Co. stained-glass windows. It has a couple of one-of-a-kind windows. 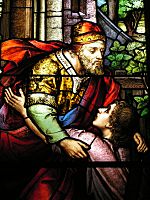 The Mayer Company's creation of stained and painted glass was at its height of production and artistry when the Cathedral's windows were installed in 1907. 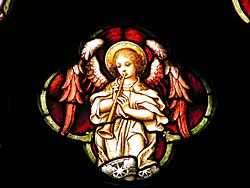 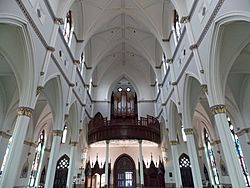 Pipe organ in the rear gallery

All content from Kiddle encyclopedia articles (including the article images and facts) can be freely used under Attribution-ShareAlike license, unless stated otherwise. Cite this article:
Cathedral of Saint John the Baptist (Charleston, South Carolina) Facts for Kids. Kiddle Encyclopedia.