Madonna and Child facts for kids 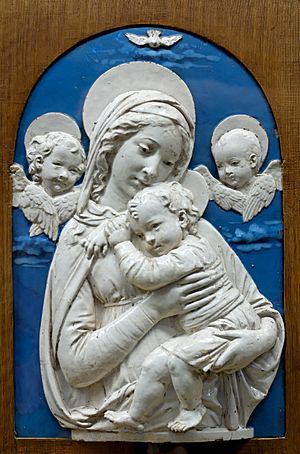 The Madonna and Child or The Virgin and Child is often the name of a work of art which shows the Virgin Mary and the Child Jesus. The word Madonna means "My Lady" in Italian. Artworks of the Christ Child and his mother Mary are part of the Roman Catholic tradition in many parts of the world including Italy, Spain, Portugal, France, South America and the Philippines. Paintings known as icons are also an important tradition of the Orthodox Church and often show the Mary and the Christ Child. They are found particularly in Eastern Europe, Russia, Egypt, the Middle East and India. 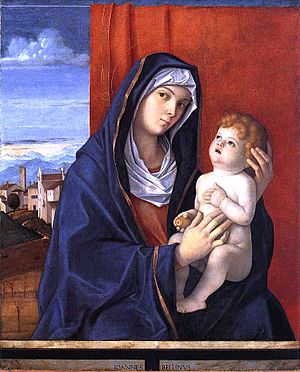 In some churches, particularly in Italy and in Eastern Orthodox Churches, there are many wall paintings and mosaics of the Madonna and Child.

Most Madonna and Child paintings are small. They have been painted for private owners and would usually have been kept in houses. They might be hung on the wall above a table where flowers and candles could be placed to honour the Virgin Mary. Most of the famous ones are now in art galleries.

Statue of the Madonna and Child, Abbey of Fontenay, Burgundy.

Many Catholic churches have statues of the Virgin Mary with the Christ Child, These are sometimes life-sized and are painted, with real hair and glass eyes so that they look lifelike.

Other statues of the Madonna and Child are very small. In the Middle Ages small statues were carved from ivory. These precious statues are often very beautifully and delicately made. They can often be seen in museums.

In Florence in the early 1400s, an artist called Luca della Robbia began making terracotta statues and sculptured altarpieces from clay, which were fired and glazed with colours, most often blue and white, but also purple, green and yellow. This family business lasted for 120 years.

Many statues of the Madonna and Child may be factory-made and sold as souvenirs. This tradition of small statues has been around for hundreds of years. Many of them were made in artist's workshops in the Early Renaissance

In the Orthodox Church, there is also a long tradition of painting images of the Virgin Mary with the Christ Child. These pictures, which are often quite small and are painted on wooden panels, are often very careful copies of particular famous icons. This tradition continues to the present day.

Famous images of the Madonna and Child 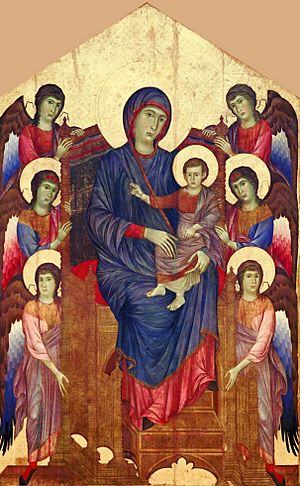 These three famous paintings are all together in one room of the Uffizi Gallery in Florence. Two of these paintings are from the Middle Ages, but Giotto's painting is an Early Renaissance painting, as can be seen in the natural, solid look of the figures which seem to be three dimensional. 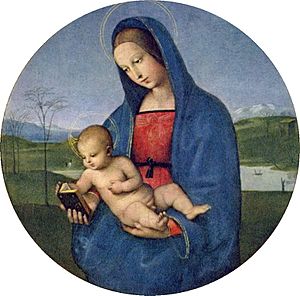 This little painting by Raphael is in the Hermitage Museum.

Many churches contain famous statues of the Madonna and Child, particularly old churches. 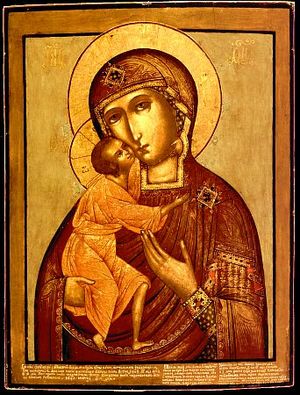 The Virgin of Mercy of Saint Theodore, c.950, Byzantine

All content from Kiddle encyclopedia articles (including the article images and facts) can be freely used under Attribution-ShareAlike license, unless stated otherwise. Cite this article:
Madonna and Child Facts for Kids. Kiddle Encyclopedia.