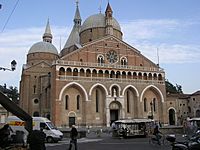 Padua (Italian: Padova) is an Italian city near Venice. It has about 210,000 people.

An old myth says that Padua was founded by the Trojan Antenore. There was a settlement since the 4th century before Christ. It got under Roman power in 215 B.C. In 426 A.D. Padua became destroyed by Attila. Narses reconstructed the city, but the Langobardes destroyed it a second time. Charles, the Great got Padua in 774 under power of the Francs, later the city joined the Holy Roman Empire of German Nation.

After struggles with Frederic Barbarossa it declared peace in 1177. In 1222 the second university of Italy was founded in Padua. The Gulfs got Padua in 1256, later the Republic of Venice got control about the city until Napoleon Bonaparte got it.

All content from Kiddle encyclopedia articles (including the article images and facts) can be freely used under Attribution-ShareAlike license, unless stated otherwise. Cite this article:
Padua Facts for Kids. Kiddle Encyclopedia.