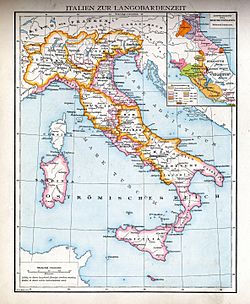 Lombard possessions in Italy: The Lombard Kingdom (Neustria, Austria and Tuscia) and the Lombard Duchies of Spoleto and Benevento

The Lombards were a Germanic people who ruled most of the Italian Peninsula from 568 to 774. They themselves thought that they had originally come from southern Scandinavia. In ancient times they had worshiped nature, but later the worshiped Odin. They grew long beards in honor of Odin and became known as "Longobards" which means "long beards".

In about 560 A.D., Audoin, who was their leader and a warrior, was succeeded by his son Alboin, a young and energetic leader. He defeated some neighboring tribes and then, in the spring of 568, Alboin led the Lombard migration into Italy. According to the History of the Lombards, "Then the Langobards, having left Pannonia, hastened to take possession of Italy with their wives and children and all their goods."

When they came to Italy, most of the Lombards still followed their old religion, but some were Arian Christians. Most of them later adopted Orthodox Christian views. In later years they fought with the Franks and later the Muslims. The Normans also fought with them between 1017 and 1078 A.D. As a result, Italy consisted of many small states until modern times.

All content from Kiddle encyclopedia articles (including the article images and facts) can be freely used under Attribution-ShareAlike license, unless stated otherwise. Cite this article:
Lombards Facts for Kids. Kiddle Encyclopedia.