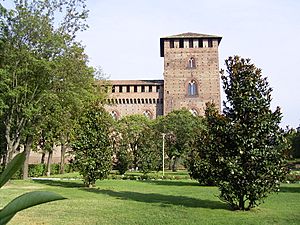 Pavia is a city in northern Italy. Pavia is in the Lombardy Region with 71.486 people living in it. It is a very old, historical city. It is 30 km south of Milan.

The town of Pavia (then known as Ticinum) was a big city and a special military area for the Romans.

Here, in 476, Odoacer won against Flavius Orestes after a long war. To make the city pay for helping his enemy, Odoacer completely ruined Pavia, but Orestes was able to escape to a city called Piacenza, where Odoacer followed and killed him, and removed from the throne his son Romulus Augustus. This is often thought of as the end of the Western Roman Empire.

A late name of the city in Latin was Papia (probably related to the Pope), which developed to the Italian name Pavia. Sometimes it's called Ticinum Papia, using both Latin names.

After the Lombards conquest, Pavia became the capital of their kingdom. During the Rule of the Dukes, it was ruled by Zaban. It continued to act as the administrative centre of the kingdom, but by the reign of Desiderius, it had fallen to a first-rate defensive work and Charlemagne took it in the Siege of Pavia (June, 774) assuming the kingship of the Lombards. Pavia remained the capital of the Italian Kingdom and the centre of royal coronations until the diminution of imperial authority there in the twelfth century.

In the 12th century Pavia acquired the status of a self-governing commune. In the political division between Guelphs and Ghibellines that characterizes the Italian Middle Ages, Pavia was traditionally Ghibelline, a position that was as much supported by the rivalry with Milan as it was a mark of the defiance of the Emperor that led the Lombard League against the emperor Frederick Barbarossa, who was attempting to reassert long-dormant Imperial influence over Italy.

In the time after that, Pavia was an important and busy town. Under the Treaty of Pavia, Emperor Louis IV gave the Palatinate to his brother during his stay in Italy. Pavia held out against the domination of Milan, finally yielding to the Visconti family, rulers of that city in 1359; under the Visconti Pavia became an intellectual and artistic centre, being the seat from 1361 of the University of Pavia founded around the nucleus of the old school of law, which attracted students from many countries.

The Battle of Pavia (1525) marks a watershed in the city's fortunes, since by that time, the former cleavage between the supporters of the Pope and those of the Holy Roman Emperor had shifted to one between a French party (allied with the Pope) and a party supporting the Emperor and King of Spain Charles V. Thus during the Valois-Habsburg Italian Wars, Pavia was naturally on the Imperial (and Spanish) side. The defeat and capture of king Francis I of France during the battle ushered in a period of Spanish occupation which lasted until 1713. Pavia was then ruled by the Austrians until 1796, when it was occupied by the French army under Napoleon.

In 1815, it again passed under Austrian administration until the Second War of Italian Independence (1859) and the unification of Italy one year later.

All content from Kiddle encyclopedia articles (including the article images and facts) can be freely used under Attribution-ShareAlike license, unless stated otherwise. Cite this article:
Pavia Facts for Kids. Kiddle Encyclopedia.