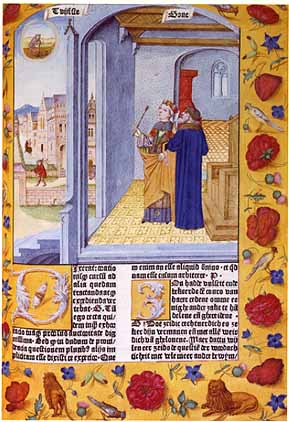 Lady Philosophy and Boethius from a manuscript of the Consolation of Philosophy, (Ghent, 1485)

Anicius Manlius Severinus Boëthius normally called Boethius (480-524 AD) was a Roman philosopher. He was from the important Roman Anicia family, which included the Roman Emperors Petronius Maximus and Olybrius. In 510 Boethius became consul in the kingdom of the Ostrogoths. He was put in prison and later executed, by King Theodoric the Great, who thought he was secretly working with the Byzantine Empire. In prison, Boethius wrote the Latin philosophy book Consolation of Philosophy. In the Middle Ages, it was a famous and important book.

All content from Kiddle encyclopedia articles (including the article images and facts) can be freely used under Attribution-ShareAlike license, unless stated otherwise. Cite this article:
Boethius Facts for Kids. Kiddle Encyclopedia.