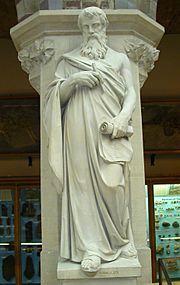 Statue of Euclid, at Oxford Museum of Natural History 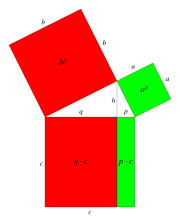 Illustration of the most famous theorem in Euclid, Pythagoras' theorem: the square on the hypotenuse of a right-angled triangle is equal to the sum of the squares on the other two sides 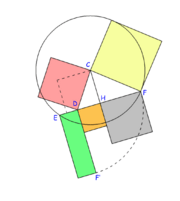 Euclid of Alexandria (Greek: Εὐκλείδης) (about 325 BC–265 BC) was a Greek mathematician who lived in Alexandria, Egypt and worked at the Library of Alexandria. Little is known about this person, but people think he lived there when Ptolemy I was Pharaoh. It is not known where and when he was born.

Euclid collected together all that was known of geometry, which is part of mathematics. His Elements is the main source of ancient geometry. Textbooks based on Euclid have been used up to the present day. In the book, he starts out from a small set of axioms (that is, a group of things that everyone thinks are true). Euclid then shows the properties of geometric objects and of whole numbers, based on those axioms.

The geometrical system described in the Elements was long known simply as geometry, and was considered to be the only geometry possible. Today that system is referred to as Euclidean geometry to distinguish it from other so-called non-Euclidean geometries which mathematicians developed in the 19th century.

In addition to the Elements, at least five works of Euclid have survived to the present day. They follow the same logical structure as Elements, with definitions and proved propositions. 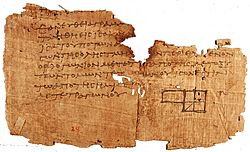 One of the oldest surviving fragments of Euclid's Elements, dated to circa AD 100. The diagram accompanies Book II, Proposition 5.

All content from Kiddle encyclopedia articles (including the article images and facts) can be freely used under Attribution-ShareAlike license, unless stated otherwise. Cite this article:
Euclid Facts for Kids. Kiddle Encyclopedia.