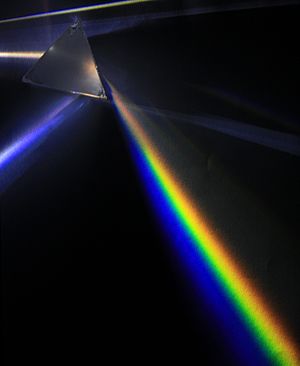 Optics is the science of light and how it interacts with the world. Optics explains how rainbows exist, how light reflects off mirrors, how light refracts through glass or water, and what splits light shining through a prism. In addition to visible light in the standard "spectrum" of red, orange, yellow, green, blue, indigo, and violet, optics also deals with invisible parts of the whole electromagnetic spectrum of which visible light is but a small part.

Optics is both a science and an area of engineering. It has been used to make many useful things, including eyeglasses, cameras, telescopes, and microscopes. Many of these things are based on lenses, which focus light and can make images of things that are bigger or smaller than the original.

While optics is an old science, new things are still being discovered in it. Scientists have learned how to make light travel through a thin optical fiber made of glass or plastic. Light can go long distances in a fiber. Fibers are used to carry phone calls and the Internet between cities.

All content from Kiddle encyclopedia articles (including the article images and facts) can be freely used under Attribution-ShareAlike license, unless stated otherwise. Cite this article:
Optics Facts for Kids. Kiddle Encyclopedia.