The Very Large Telescope (VLT) is a telescope operated by the European Southern Observatory. It is on Cerro Paranal in the Atacama Desert of northern Chile.

The VLT consists of four separate telescopes, each with a main mirror 8.2m across. They are often used separately, but they can be used together to get a very high angular resolution. The observatory also has four movable Auxiliary Telescopes (ATs) of 1.8 m aperture.

The VLT operates at visible and infrared wavelengths. Each individual telescope can detect objects roughly four billion times fainter than can be seen with the naked eye. When all the telescopes are combined, the facility can achieve an angular resolution of about 0.001 arc-second. This is equivalent to roughly two metres at the distance of the Moon.

The VLT is the most productive ground-based facility for astronomy: only the Hubble Space Telescope leads to more scientific papers in observational astronomy.

Among the pioneering observations carried out using the VLT are the first direct image of an exoplanet, the tracking of individual stars moving around the supermassive black hole at the centre of the Milky Way, and observations of the afterglow of the furthest known gamma-ray burst. 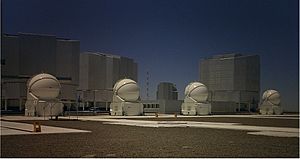 The Four ATs at Paranal. The Unit Telescopes are in the background

The four smaller 1.8-metre ATs are available and dedicated to interferometry. This allows the VLT to operate every night on visible and infrared wavelengths.

All content from Kiddle encyclopedia articles (including the article images and facts) can be freely used under Attribution-ShareAlike license, unless stated otherwise. Cite this article:
Very Large Telescope Facts for Kids. Kiddle Encyclopedia.