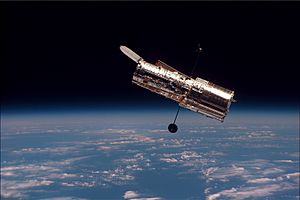 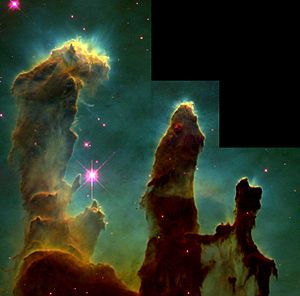 The Hubble Space Telescope (HST) is the first big optical space observatory telescope. Being above the atmosphere means it can see the sky more clearly than a telescope on the ground. The atmosphere blurs starlight before it reaches Earth. Named after the astronomer Edwin Hubble, the Hubble Space Telescope can observe 24 hours a day. The main mirror is 94.5 inches (2.4 meters) across. The telescope can take pictures of things so far away it would be nearly impossible to see them from anywhere else.

It was made by both NASA and the ESA working together. It is 600 km in space and was launched on April 24, 1990. Like other things in low Earth orbit it travels at 5 miles (10 km) per second. If you were going this speed on Earth, you would be able to get from New York to San Francisco in 10 minutes. This speed creates difficulty in scheduling observations. 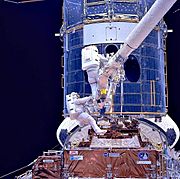 When the HST took its first pictures, astronomers were happy to see the images, but they were not as sharp and as crisp as expected. Telescopes in space can take better pictures than telescopes on Earth, but for some reason, the pictures were not better than the pictures taken on Earth. They found a problem with the telescope's mirror. The mirror was not curved right. It was only wrong by 2.2 microns (1/50th as thick as a piece of paper). Still, this was enough to cause the images to be blurred. Some said that Hubble was nearsighted.

Another space shuttle was soon sent up to repair the space telescope. The repair was not easy. The astronauts had to install some small mirrors to correct the light from the big mirror. The big mirror could still be used. It took five days of space walks. When an astronaut opened one of the doors on Hubble to install a new camera, the door would not close. The astronauts had to think of a creative way to get around the problem. Eventually, Hubble was fixed. 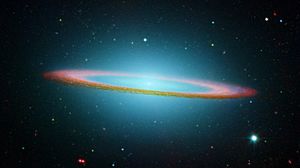