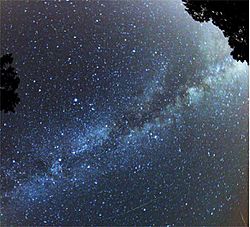 A green and red Perseid meteor streaks across the sky just below the Milky Way in August 2007. 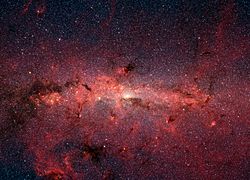 Infrared image of the core of the Milky Way Galaxy 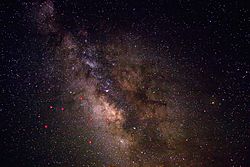 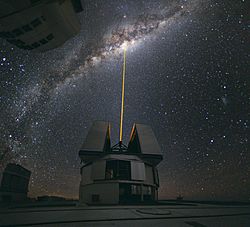 "Laser towards the Milky Way". Despite the first impression of a science-fiction movie, this extraordinary image is of recent cutting-edge research. It was taken at the high-altitude Paranal Observatory in Chile. The laser reaches 90 km into the Earth's mesosphere to form a reference point. It helps sharper observations of phenomena such as the giant black hole at the centre of the galaxy.

The Milky Way is our home galaxy. It contains over 200 billion stars, including our Sun.

The Milky Way has a diameter of 100,000 light years, and is a barred spiral galaxy. The discovery of the Milky Way goes back to the Ancient Greek philosopher Democritus. The Milky Way has three main parts: a disk, in which the Solar System resides, a bulge at the core, and an all encompassing halo.

It is estimated to contain at least 200 billion stars and possibly up to 400 billion stars. The figure depends on the number of very low-mass, or dwarf stars, which are hard to detect, especially more than 300 light years from our sun. Therefore, present estimates of the total number are uncertain. This can be compared to the one trillion (1012) stars of the neighbouring Andromeda Galaxy.

Extending beyond the stellar disk is a much thicker disk of gas. Recent observations indicate that the gaseous disk of the Milky Way has a thickness of around 12000 light years–twice the previously accepted value. As a guide to the relative physical scale of the Milky Way, if the Solar System out to the orbit of Pluto were reduced to the size of a US quarter (about an inch or 25 mm in diameter), the Milky Way would have a diameter of 2,000 kilometers. At 220 kilometers per second it takes the Solar System about 240 million years to complete one orbit of the Galaxy (a galactic year).

The Galactic halo extends outward, but is limited in size by the orbits of two Milky Way satellites, the Large and the Small Magellanic Clouds, whose closest approach is at about 180,000 light years. At this distance or beyond, the orbits of most halo objects would be disrupted by the Magellanic Clouds, and the objects would likely be ejected from the vicinity of the Milky Way. 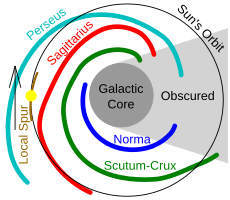 Observed spiral structure of the Milky Way galaxy. The arrow points the direction of the solar system's motion relative to the spiral arms. 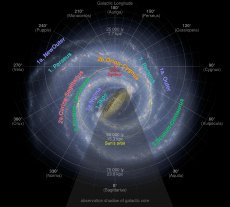 The Milky Way's spiral arms. Our Sun is in the Orion–Cygnus Arm.

The galactic disc, which bulges outward at the galactic center, has a diameter of 70–100,000 light years.

The exact distance from the Sun to the galactic center is debated. The latest estimates give distances to the Galactic center of 25–28,000 light years.

The nature of the galaxy's bar is also actively debated, with estimates for its half-length and orientation spanning from 3,300–16,000 light years (short or a long bar) and 10–50 degrees. Viewed from the Andromeda Galaxy, it would be the brightest feature of our own galaxy.

In Greek mythology, Zeus places his son (the baby Heracles) whose mother was a mortal woman on Hera's breast while she is sleeping so that the baby will drink her divine milk and become immortal. However, Hera wakes up while she is breastfeeding the baby and realizes she is nursing a baby she does not know. According to Greek mythology, she then pushes the baby away and a stream of her milk sprays the night sky, making a faint band of light known as the Milky Way.

All content from Kiddle encyclopedia articles (including the article images and facts) can be freely used under Attribution-ShareAlike license, unless stated otherwise. Cite this article:
Milky Way Facts for Kids. Kiddle Encyclopedia.