Kids Encyclopedia Facts
This page is about the star. For the telescope, see Antares Telescope. 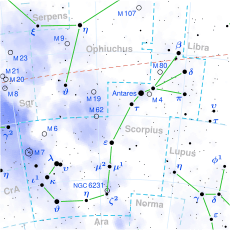 Location of Antares in Scorpius.

Antares (α Scorpii, Alpha Scorpii) is a red supergiant star in the Milky Way galaxy and the sixteenth brightest star in the nighttime sky. It is listed as 15th or 16th brightest, depending on how the two brighter components of the Capella quadruple star system are counted.

Antares has a secondary, or companion star, Antares B. The orbit of the companion star and its properties are not properly known, with an estimated period of 1,200 to 2,562 years.

Antares is one of the first red supergiants to be directly imaged.

All content from Kiddle encyclopedia articles (including the article images and facts) can be freely used under Attribution-ShareAlike license, unless stated otherwise. Cite this article:
Antares Facts for Kids. Kiddle Encyclopedia.