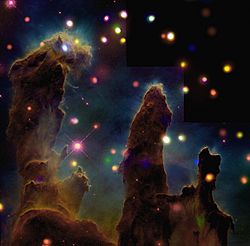 Eagle nebula. Pillars made of dense cold gas are visible.

In astronomy, the interstellar medium (sometimes called the ISM) is the tenuous gas and dust that fills the void between stellar systems in galaxies, that consisting mainly of huge clouds of ionized, netral, or moleculer hydrogen. This gas and dust not distributed uniformly in interstellar space, but displays significant variations in density, temperature, and ionization state.

All content from Kiddle encyclopedia articles (including the article images and facts) can be freely used under Attribution-ShareAlike license, unless stated otherwise. Cite this article:
Interstellar medium Facts for Kids. Kiddle Encyclopedia.