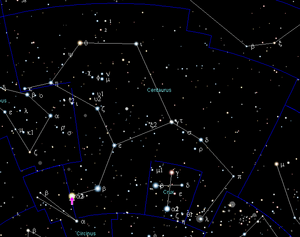 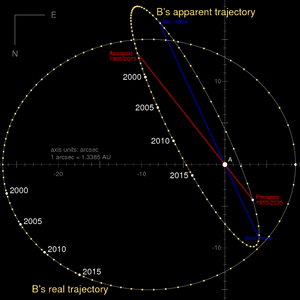 Alpha Centauri is a binary star system of two stars A & B. The distance between them is quite close. To the naked eye, the stars are too close for the eye to be able to see them as separate. Their orbit is about the distance of the giant planets from our Sun.

There is a third star, Proxima Centauri (or Alpha Centauri C). This is usually considered separately, but in fact it is also gravitationally connected to the other two. It is actually slightly closer to us, with a very much larger orbit around A and B.

All content from Kiddle encyclopedia articles (including the article images and facts) can be freely used under Attribution-ShareAlike license, unless stated otherwise. Cite this article:
Alpha Centauri Facts for Kids. Kiddle Encyclopedia.