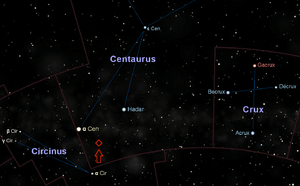 Proxima Centauri was found to share the same proper motion as Alpha Centauri in 1915 by Robert Innes while he was Director of the Union Observatory in Johannesburg, South Africa.

In 1951, Harlow Shapley said that Proxima Centauri was a flare star. Recorded photographs showed that the star became measurably brighter about 8% of the time, making it the most active flare star then found.

The size of Proxima Centauri (right) compared to its nearest neighbors.

Red dwarfs are usually far too faint to be seen with the naked eye, that means without a telescope. Proxima Centauri has an apparent magnitude of 11 while its absolute magnitude is a very dim 15.5. Even from Alpha Centauri A or B, Proxima would only be seen as a 5th magnitude star.

Proxima Centauri has been the closest star to the Sun for about the last 32,000 years. Barnard's Star will make its closest approach to the Sun around AD 11,700, when it approaches to within about 3.8 light-years. However, at that time, it will not be the nearest star, since Proxima Centauri will then have moved even closer to the Sun. Six stars will come closer to Earth in the next 45,000 years. 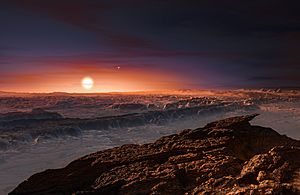 Impression of the surface of Proxima Centauri b. The Alpha Centauri system can be seen as two small stars in the sky.

In October of 2016, scientists at France's CNRS research institute said that the planet may have oceans on its surface, and a thin atmosphere. If this idea is true or not is not known.

Another planet, Proxima Centauri c, much farther out than b, was discovered in 2019. It is seven times heavier (more massive) than Earth. It is too cold to be habitable. Because it showed up brighter than expected when photos of it were taken, it may have a ring system five times wider than that of Jupiter.

All content from Kiddle encyclopedia articles (including the article images and facts) can be freely used under Attribution-ShareAlike license, unless stated otherwise. Cite this article:
Proxima Centauri Facts for Kids. Kiddle Encyclopedia.