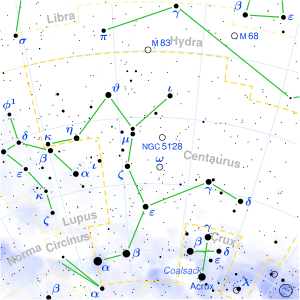 Beta Centauri (β Centauri, β Cen, Agena, or Hadar), is a triple star system in the southern constellation of Centaurus.

The system's combined apparent visual magnitude of 0.61 makes it the second-brightest star in Centaurus and one of the brightest stars in the night sky. According to parallax measurements from the astrometric Hipparcos satellite, the distance to this system is about 390 ± 20 light-years (120 ± 6 parsecs).

Beta Centauri is well known in the Southern Hemisphere. A line made from Alpha Centauri, through Beta Centauri leads to within a few degrees of Gacrux, the star at the top of the Southern Cross. Using Gacrux, a navigator can draw a line with Acrux at the bottom to find South.

All content from Kiddle encyclopedia articles (including the article images and facts) can be freely used under Attribution-ShareAlike license, unless stated otherwise. Cite this article:
Beta Centauri Facts for Kids. Kiddle Encyclopedia.