Crux (IPA: /ˈkrʊks/, Latin: cross), commonly known as the Southern Cross (in contrast to the Northern Cross), is one of the modern constellations. It points to the directions of north, south, east and west. It is the smallest modern constellation. It was first described by the Italian navigator Andrea Corsali in 1515.

In the past, sailors used to use Crux as a means of navigation.

The Southern Cross was used on the flag flown by miners in Ballarat, Victoria, during the rebellion known as the Eureka Stockade. The Southern Cross flag has been used as a symbol of protest in Australia since 1854. 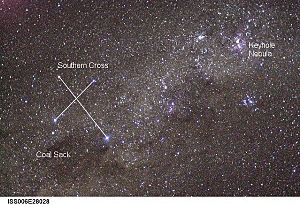 All content from Kiddle encyclopedia articles (including the article images and facts) can be freely used under Attribution-ShareAlike license, unless stated otherwise. Cite this article:
Crux Facts for Kids. Kiddle Encyclopedia.