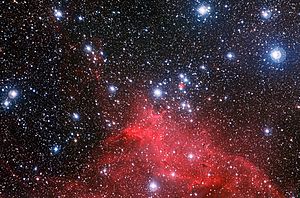 Star cluster NGC 3572 and its surroundings.

An open star cluster, also known as galactic cluster, is a group of a few hundred or thousand stars. They have roughly the same age, and were formed from the same giant molecular cloud.

More than 1,100 open clusters have been discovered within the Milky Way Galaxy, and many more are thought to exist. They are loosely bound together by mutual gravitational attraction, but they get disrupted by close encounters with other clusters and clouds of gas. Open clusters generally survive for a few hundred million years, with the most massive ones surviving for a few billion years.

In contrast, the more massive globular clusters of stars exert a stronger gravitational attraction on their members. So, they can survive for longer. Open clusters have been found only in spiral and irregular galaxies, in which active star formation is occurring.

All content from Kiddle encyclopedia articles (including the article images and facts) can be freely used under Attribution-ShareAlike license, unless stated otherwise. Cite this article:
Open star cluster Facts for Kids. Kiddle Encyclopedia.