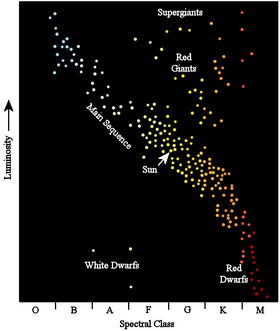 Hertzsprung-Russell diagrams are graphs that measure each star's brightness against its temperature or color. The main sequence appears as a band going from the upper-left (hot and bright) to the lower-right (cooler and less bright). You can see an example of the band of main-sequence stars to the right.

In general, the hottest and brightest stars (in the upper-left of the Hertzsprung-Russell diagram) also have the most mass. The main sequence is sometimes divided into two parts. Any star that has a mass greater than 1.5 times the Sun's mass is grouped into the upper main sequence; any star with a mass lower than 1.5 solar masses belongs to the lower main sequence.

Stars get the energy they produce through nuclear fusion of hydrogen into helium. The upper main sequence (hot and bright with the most mass) produces energy by one type of nuclear fusion involving only hydrogen and helium. The lower main sequence (cooler and less bright with a lower mass) produces energy by another type of nuclear fusion. This type uses other elements (for example, carbon, nitrogen and oxygen) with higher atomic numbers as nuclear catalysts.

Nowadays, a new star may be classified as main sequence just by its color. A main sequence star of a particular color has a narrow band of brightness when seen from a standard distance. An astronomer could calculate the distance to this newly-discovered star by comparing its brightness as seen from Earth against the brightness for a certain color on the main sequence.

All content from Kiddle encyclopedia articles (including the article images and facts) can be freely used under Attribution-ShareAlike license, unless stated otherwise. Cite this article:
Main sequence Facts for Kids. Kiddle Encyclopedia.