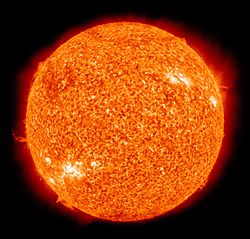 The Sun generates its energy by nuclear fusion of hydrogen nuclei into helium. In its core, the Sun fuses 620 million metric tons of hydrogen each second. 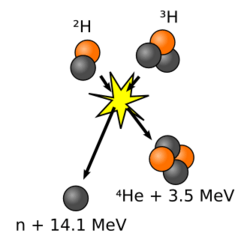 The hydrogen deuterium-tritium (D-T) fusion reaction is used to release the fusion energy.

Nuclear fusion is the process of making a single heavy nucleus (part of an atom) from two lighter nuclei. This process is called a nuclear reaction. It releases a large amount of energy.

Fusion happens in the middle of stars, like the Sun. Hydrogen atoms are fused together to make helium. This releases lots of energy. This energy powers the heat and light of the star. Not all elements can be joined. Heavier elements are less easily joined than lighter ones. Iron (a metal) cannot fuse with other atoms. This is what causes stars to die. Stars join all of their atoms together to make heavier atoms of different types, until they start to make iron. The iron nucleus cannot fuse with other nuclei. The reactions stop. The star eventually will cool down and die.

On Earth it is very difficult to start nuclear fusion reactions that release more energy than is needed to start the reaction. The reason is that fusion reactions only happen at high temperature and pressure, like in the Sun, because both nuclei have a positive charge, and positive repels positive. The only way to stop the repulsion is to make the nuclei hit each other at very high speeds. They only do that at high pressure and temperature. The only successful approach so far has been in nuclear weapons. The hydrogen bomb uses an atomic (fission) bomb to start fusion reactions. Scientists and engineers have been trying for decades to find a safe and working way of controlling and containing fusion reactions to generate electricity. They still have many challenges to overcome before fusion power can be used as a clean source of energy.

All content from Kiddle encyclopedia articles (including the article images and facts) can be freely used under Attribution-ShareAlike license, unless stated otherwise. Cite this article:
Nuclear fusion Facts for Kids. Kiddle Encyclopedia.