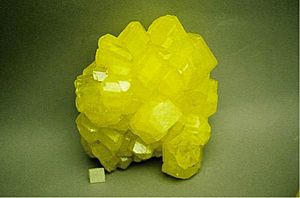 The element Sulphur has a crystalline structure 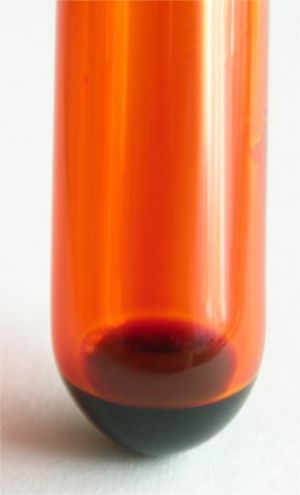 Bromine is one of only two elements that are liquid, at 25°C. The other is Mercury

Abundances of the chemical elements in the Solar system. Hydrogen and helium are most common, from the Big Bang. The next three elements (Li, Be, B) are rare because they are poorly synthesized in the Big Bang and also in stars. The two general trends in the remaining stellar-produced elements are: (1) an alternation of abundance in elements as they have even or odd atomic numbers (the Oddo-Harkins rule), and (2) a general decrease in abundance as elements become heavier. Iron is especially common because it represents the minimum energy nuclide that can be made by fusion of helium in supernovae.

The number of protons in the nucleus causes its electric charge. This fixes the number of electrons in its normal (unionized) state. The electrons in their atomic orbitals determine the atom's various chemical properties.

Elements are the basic building blocks for all types of substances. When they are combined with each other, they can form molecules.

118 different chemical elements are known to modern chemistry. 92 of these elements can be found in nature, and the others can only be made in laboratories. The human body is made up of 26 elements. The last natural element discovered was uranium, in 1789. The first man-made element was Technetium, in 1937.

Chemical elements are commonly arranged in the periodic table. Where the elements are on the table tells us about their properties relative to the other elements.

Elements can join (react) to form pure compounds (such as water, salts, oxides, and organic compounds). In many cases, these compounds have a fixed composition and their own structure and properties. The properties of the compound may be very different from the elements it is made from. Sodium is a metal that burns when put into water and chlorine is a poisonous gas. When they react together they make sodium chloride (salt) which is harmless and edible.

Some elements, particularly metal elements mix together in any proportion to form new structures. Such new structures are not compounds. They are called mixtures.

Most elements in nature consist of atoms with different numbers of neutrons. An isotope is a form of an element with a certain number of neutrons. For example, carbon has two stable, naturally occurring isotopes: carbon-12 (6 neutrons) and carbon-13 (7 neutrons). Carbon-14 (8 neutrons) is a naturally occurring radioactive isotope of carbon. Of each element, except for Ununoctium, at least two isotopes are known.

Elements can be classified based on physical states. At room temperature and pressure, most elements are solids, only 11 are gases and 2 are liquids.

Elements can also be classified into metals and non-metals. There are many more metals than non-metals.

However, a few elements have properties in between those of metals and non-metals. These elements are called semimetals (or metalloids). 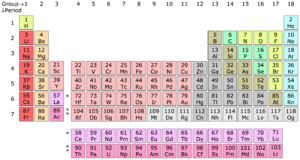 All content from Kiddle encyclopedia articles (including the article images and facts) can be freely used under Attribution-ShareAlike license, unless stated otherwise. Cite this article:
Chemical element Facts for Kids. Kiddle Encyclopedia.