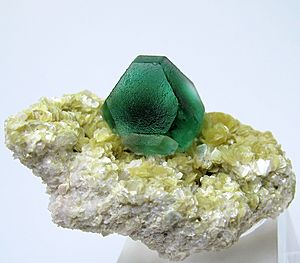 Fluorite, a source of fluorine, in the form of an isolated crystal

Nonmetal or non-metal is a chemical element that does not have the properties of a metal. They can either be gases or elements that do not have the properties of a metals. Examples of gaseous elements are: hydrogen, helium, oxygen, nitrogen, fluorine, neon, or radon, just to name a few. An example of a solid that is a nonmetal is sulfur. It is yellow and not shiny at all. An example of a liquid that is a nonmetal is bromine. It is red. A non metal is also a good insulator for heat and cold. Usually, gases or brittle solids are non-metals. Elements on the periodic table can be classified as metal, semimetal, or non-metal.

Five times more elements are metals than nonmetals. Two of the nonmetals—hydrogen and helium—make up over 99 per cent of the observable Universe, and one—oxygen—makes up close to half of the Earth's crust, oceans and atmosphere. Living organisms are also composed almost entirely of nonmetals, and nonmetals form many more compounds than metals.

All content from Kiddle encyclopedia articles (including the article images and facts) can be freely used under Attribution-ShareAlike license, unless stated otherwise. Cite this article:
Nonmetal Facts for Kids. Kiddle Encyclopedia.