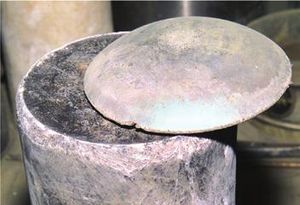 A button of plutonium above a calcium chloride salt cake.

Plutonium is the chemical element with the atomic number 94 and chemical symbol Pu. It is a highly radioactive metal. It is the metal used in most nuclear weapons. The chemical element plutonium has some different isotopes. The most important isotope of plutonium is 239Pu (or plutonium-239). It takes 24,110 years for half of a sample of plutonium-239 to decay, which is called its half-life. It can be made from natural uranium and is fissile. The isotope that has the longest half-life is 244Pu (or plutonium-244). Plutonium-244 has a half-life of about 80 million years. The half life of 244Pu is long enough that some of this isotope of plutonium is found in very small amounts in nature. Plutonium-238 is used in Radioisotope Thermoelectric Generators.

Like other transuranium elements, plutonium can react with water, oxygen, carbon, halogens, nitrogen, and silicon. It forms oxides and hydrides in moist air, causing the plutonium sample to expand by up to 70%. Plutonium from the expanding sample can flake off and catch fire at room temperature. Plutonium is also toxic, although it is less toxic than many people think. The reactivity and toxicity of plutonium make it difficult to handle. 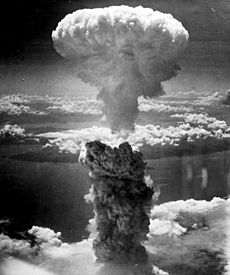 The atomic bomb dropped on Nagasaki, Japan in 1945 had a plutonium core.

The isotope plutonium-239 is a key fissile component in nuclear weapons, due to its ease of fission and availability. Encasing the bomb's plutonium pit in a tamper (an optional layer of dense material) decreases the amount of plutonium needed to reach critical mass by reflecting escaping neutrons back into the plutonium core. This reduces the amount of plutonium needed to reach criticality from 16 kg to 10 kg, which is a sphere with a diameter of about 10 centimeters (4 in). This critical mass is about a third of that for uranium-235.

The Fat Man plutonium bombs used explosive compression of plutonium to obtain significantly higher densities than normal, combined with a central neutron source to begin the reaction and increase efficiency. Thus only 6.2 kg of plutonium was needed for an explosive yield equivalent to 20 kilotons of TNT. Hypothetically, as little as 4 kg of plutonium—and maybe even less—could be used to make a single atomic bomb using very sophisticated assembly designs.

Spent nuclear fuel from normal light water reactors contains plutonium, but it is a mixture of plutonium-242, 240, 239 and 238. The mixture is not sufficiently enriched for efficient nuclear weapons, but can be used once as MOX fuel. Accidental neutron capture causes the amount of plutonium-242 and 240 to grow each time the plutonium is irradiated in a reactor with low-speed "thermal" neutrons, so that after the second cycle, the plutonium can only be consumed by fast neutron reactors. If fast neutron reactors are not available (the normal case), excess plutonium is usually discarded, and forms the longest-lived component of nuclear waste. The desire to consume this plutonium and other transuranic fuels and reduce the radiotoxicity of the waste is the usual reason nuclear engineers give to make fast neutron reactors.

The most common chemical process, PUREX (Plutonium–URanium EXtraction) reprocesses spent nuclear fuel to extract plutonium and uranium which can be used to form a mixed oxide (MOX) fuel for reuse in nuclear reactors. Weapons-grade plutonium can be added to the fuel mix. MOX fuel is used in light water reactors and consists of 60 kg of plutonium per tonne of fuel; after four years, three-quarters of the plutonium is burned (turned into other elements). Breeder reactors are specifically designed to create more fissionable material than they consume.

MOX fuel has been in use since the 1980s, and is widely used in Europe. In September 2000, the United States and the Russian Federation signed a Plutonium Management and Disposition Agreement by which each agreed to dispose of 34 tonnes of weapons-grade plutonium. The U.S. Department of Energy plans to dispose of 34 tonnes of weapons-grade plutonium in the United States before the end of 2019 by converting the plutonium to a MOX fuel to be used in commercial nuclear power reactors.

MOX fuel improves total burnup. A fuel rod is reprocessed after three years of use to remove waste products, which by then account for 3% of the total weight of the rods. Any uranium or plutonium isotopes produced during those three years are left and the rod goes back into production. The presence of up to 1% gallium per mass in weapons-grade plutonium alloy has the potential to interfere with long-term operation of a light water reactor.

Plutonium recovered from spent reactor fuel poses little proliferation hazard, because of excessive contamination with non-fissile plutonium-240 and plutonium-242. Separation of the isotopes is not feasible. A dedicated reactor operating on very low burnup (hence minimal exposure of newly formed plutonium-239 to additional neutrons which causes it to be transformed to heavier isotopes of plutonium) is generally required to produce material suitable for use in efficient nuclear weapons. While "weapons-grade" plutonium is defined to contain at least 92% plutonium-239 (of the total plutonium), the United States have managed to detonate an under-20Kt device using plutonium believed to contain only about 85% plutonium-239, so called '"fuel-grade" plutonium. The "reactor-grade" plutonium produced by a regular LWR burnup cycle typically contains less than 60% Pu-239, with up to 30% parasitic Pu-240/Pu-242, and 10–15% fissile Pu-241. It is unknown if a device using plutonium obtained from reprocessed civil nuclear waste can be detonated, however such a device could hypothetically fizzle and spread radioactive materials over a large urban area. The IAEA conservatively classifies plutonium of all isotopic vectors as "direct-use" material, that is, "nuclear material that can be used for the manufacture of nuclear explosives components without transmutation or further enrichment". 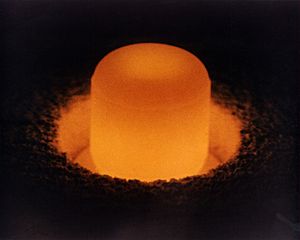 A glowing cylinder of 238PuO2 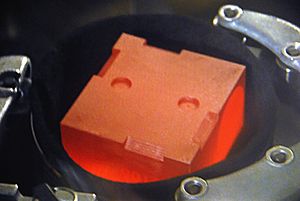 The 238PuO2 radioisotope thermoelectric generator of the Curiosity rover

The isotope plutonium-238 has a half-life of 87.74 years. It emits a large amount of thermal energy with low levels of both gamma rays/photons and spontaneous neutron rays/particles. Being an alpha emitter, it combines high energy radiation with low penetration and thereby requires minimal shielding. A sheet of paper can be used to shield against the alpha particles emitted by plutonium-238. One kilogram of the isotope can generate about 570 watts of heat.

These characteristics make it well-suited for electrical power generation for devices that must function without direct maintenance for timescales approximating a human lifetime. It is therefore used in radioisotope thermoelectric generators and radioisotope heater units such as those in the Cassini, Voyager, Galileo and New Horizons space probes, and the Curiosity Mars rover.

The twin Voyager spacecraft were launched in 1977, each containing a 500 watt plutonium power source. Over 30 years later, each source is still producing about 300 watts which allows limited operation of each spacecraft. An earlier version of the same technology powered five Apollo Lunar Surface Experiment Packages, starting with Apollo 12 in 1969.

Plutonium-238 has also been used successfully to power artificial heart pacemakers, to reduce the risk of repeated surgery. It has been largely replaced by lithium-based primary cells, but as of 2003[update] there were somewhere between 50 and 100 plutonium-powered pacemakers still implanted and functioning in living patients. By the end of 2007, the number of plutonium-powered pacemakers was reported to be down to just nine. Plutonium-238 was studied as a way to provide supplemental heat to scuba diving. Plutonium-238 mixed with beryllium is used to generate neutrons for research purposes.

All content from Kiddle encyclopedia articles (including the article images and facts) can be freely used under Attribution-ShareAlike license, unless stated otherwise. Cite this article:
Plutonium Facts for Kids. Kiddle Encyclopedia.