Ceres is in the asteroid belt (through the Hubble Space Telescope)

Pluto with its moons, Charon, Nix and Hydra (artist's conception)

Haumea with its moons, Hiʻiaka and Namaka (artist's conception) 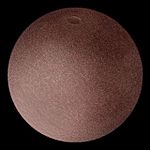 Dwarf planet is the name used to classify some objects in the solar system. This definition was made on August 24, 2006 by the International Astronomical Union (IAU), and can be described as; a dwarf planet is a body orbiting the Sun that is big enough to round itself by its own gravity, but has not cleared its orbital path of other rival bodies. At the same meeting the IAU also defined the term planet for the first time. Some astronomers think that the term "dwarf planet" is too confusing and needs to be changed.

The five dwarf planets, in order from the Sun are

The dwarf planets, unlike the terrestrial and gas giant planets, are in more than one region of the solar system. Ceres is in the asteroid belt, Pluto's orbit is mostly outside that of Neptune, but partly inside: it is very eccentric in shape. The others are in the trans-Neptune region.

No space probes have visited any of the dwarf planets. This will change if NASA's Dawn and New Horizons missions reach Ceres and Pluto, respectively, as planned in 2015. Dawn also orbited and observed another not sphere-like but still potential dwarf planet, Vesta, in 2011.

All content from Kiddle encyclopedia articles (including the article images and facts) can be freely used under Attribution-ShareAlike license, unless stated otherwise. Cite this article:
Dwarf planet Facts for Kids. Kiddle Encyclopedia.