Dawn was launched on September 27, 2007 at Cape Canaveral Air Force Station aboard a Delta 7925-H rocket. It then travelled to Mars for a gravity assist, making its closest approach to Mars in February 2009. 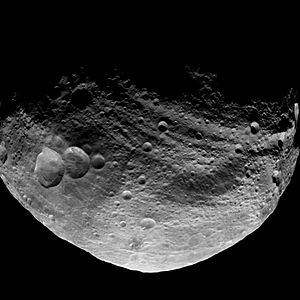 One of the photos Dawn took of Vesta

All content from Kiddle encyclopedia articles (including the article images and facts) can be freely used under Attribution-ShareAlike license, unless stated otherwise. Cite this article:
Dawn (spacecraft) Facts for Kids. Kiddle Encyclopedia.