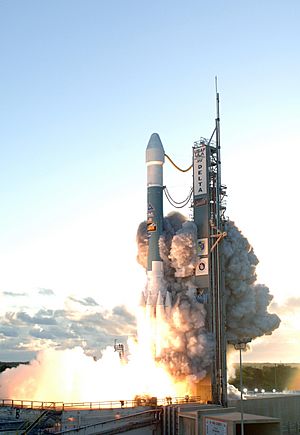 Delta II was a rocket used to launch various projects into space. The Delta series of rockets were first designed and made by McDonnell Douglas. This company joined with Boeing in 1997. Delta II rockets had been made since 2006 by United Launch Alliance, which is a joint company owned by Boeing and Lockheed Martin to supply launch rockets to the US government. Boeing Launch Services supplied Delta II rockets to private companies.

The Delta II rockets were based on the Thor rockets built in the 1950's. These were used to carry Inter Continental Ballistic Missiles. The first Thor was launched on January 26, 1957. The Delta II rocket was first launched on 14 February 1989. The rocket was developed after the explosion of the Space Shuttle Challenger in 1986. The US Air Force needed another way to launch its GPS satellites. As of 2018, there had been 156 Delta II launches from both Cape Canaveral Air Force Station and the Vandenberg Air Force Base. Only two launches were unsuccessful. On 5 August 1995, a rocket motor failure meant the Koreasat 1 was put into a lower orbit. On 17 January 1997, Delta 241 carrying the GPS IIR-1 exploded 13 seconds after taking off.

The last time the Delta II took off on 15 September 2018, when she carried the ICESat-2 satellite.

All content from Kiddle encyclopedia articles (including the article images and facts) can be freely used under Attribution-ShareAlike license, unless stated otherwise. Cite this article:
Delta II Facts for Kids. Kiddle Encyclopedia.