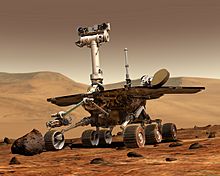 An artist's sketch of Opportunity on the surface of Mars

Opportunity, also known as MER-B (Mars Exploration Rover – B) or MER-1, and nicknamed Oppy, was a robotic rover that was active on Mars from 2004 to 2018.

It was launched on July 7, 2003, as part of NASA's Mars Exploration Rover program, it landed in Meridiani Planum on January 25, 2004, three weeks after its twin Spirit (MER-A) touched down on the other side of the planet Mars.

With a planned 90-sol duration of activity (slightly more than 90 earth days), Spirit functioned until getting stuck in 2009 and stopped communications in 2010. Opportunity was able to stay operational for 5352 sols after landing, maintaining its power and key systems through continual recharging of its batteries through solar power.

Due to the massive dust storms on Mars in 2018, Opportunity stopped communications on June 10, 2018. It was hoped it would reboot once the atmosphere cleared. However it did not, as it either suffered a catastrophic failure or that a layer of dust has covered its solar panels.

On February 13, 2019, NASA officials declared that the Opportunity mission was complete, after the spacecraft failed to respond to repeated signals sent since August 2018.

All content from Kiddle encyclopedia articles (including the article images and facts) can be freely used under Attribution-ShareAlike license, unless stated otherwise. Cite this article:
Opportunity (rover) Facts for Kids. Kiddle Encyclopedia.