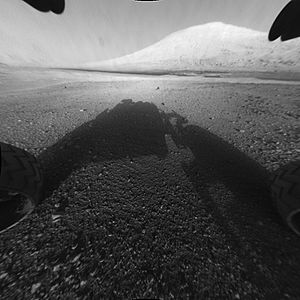 The Curiosity rover is a robotic car-sized Mars rover. It is exploring Gale Crater, which is near the equator of Mars. The rover uses a nuclear power and is part of NASA's Mars Science Laboratory (MSL).

The MSL mission has four main scientific goals: study Martian climate and geology, search for water, and find out whether Mars could have ever supported life. Curiosity carries the most advanced scientific equipment ever used on the surface of Mars.

Curiosity is the fourth NASA surface rover sent to Mars in 16 years. Curiosity is also the heaviest robotic wheeled vehicle (at 900 kg) to have ever landed on Mars (The Soviet Union's Lunokhod 2 lunar rover (1800) used to be the largest with 840 kg). Curiosity was launched from Cape Canaveral on November 26, 2011 at 10:02 EST. It successfully landed on Aeolis Palus in Gale Crater on Mars on August 6, 2012, 05:21:27 UTC.

In December 2012, Curiosity's two-year mission was extended indefinitely. On August 7, 2017, NASA celebrated the fifth anniversary of the Curiosity rover landing and related exploratory accomplishments on the planet Mars. The rover is still operational, and as of June 29, 2022, Curiosity has been on Mars for 3517 sols (3614 total days) since landing on August 6, 2012.

Curiosity's design served as the basis for the Mars 2020 rover to be launched in July 2020.

The main scientific goals of the MSL mission is to search whether Mars could ever have supported life or water and to study the climate and geology of Mars. The Curiosity rover has six main scientific objectives: 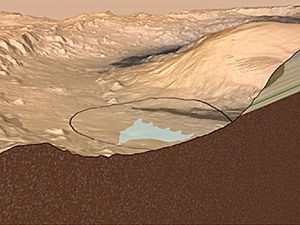 The original landing site for Curiosity.

The rover's landing was planned for a small region of Aeolis Palus within Gale crater. Gale crater is an about 2 billion-years-old impact crater on Mars. It was filled with sediments by water and wind. Later, wind erosion removed all sediments, leaving a 5.5 km (3.4 mile) high mountain (Mount Sharp).

The crater is 154 km (94 mi) wide. The crater was chosen because it may allow for the study of two billion years of Martian history. The landing site is also near an alluvial fan. The alluvial fan is believed to be the result of a flow of ground water.

NASA collected more than 1.2 million names from people who sent their names from 2009 to 2011. Their names are on a microchip which is located on the deck of Curiosity.

Live videos showing the first footage from the surface of Mars was available at NASA TV. It was shown live during the night of August 5, 2012. The NASA website became unavailable because of the large number of people visiting it.

The Curiosity rover has three scoops which can dig up the soil on Mars so it can be studied. These scoops are kept clean by using Martian sand as an abrasive cleaner. Soil samples are studied inside Curiosity using a chemistry and mineralogy instrument called CheMin. CheMin uses X-ray diffraction to discover what minerals are in the soil samples. This information is then sent back to Earth.

Curiosity's view of the Rocknest area. South is at center, north is at both ends. Mount Sharp dominates the horizon, while Glenelg is left-of-center and rover tracks are right-of-center (November 16, 2012; white balanced; raw color version; high-res panoramic). 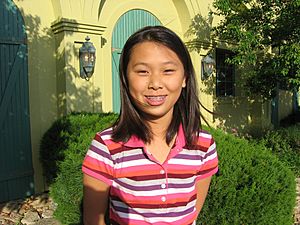 A NASA panel selected the name Curiosity following a nationwide student contest that attracted more than 9,000 proposals via the Internet and mail. A sixth-grade student from Kansas, twelve-year-old Clara Ma from Sunflower Elementary School in Lenexa, Kansas, submitted the winning entry. As her prize, Ma won a trip to NASA's Jet Propulsion Laboratory (JPL) in Pasadena, California, where she signed her name directly onto the rover as it was being assembled.

Ma wrote in her winning essay:

Curiosity is an everlasting flame that burns in everyone's mind. It makes me get out of bed in the morning and wonder what surprises life will throw at me that day. Curiosity is such a powerful force. Without it, we wouldn't be who we are today. Curiosity is the passion that drives us through our everyday lives. We have become explorers and scientists with our need to ask questions and to wonder.

NASA gave the general public the opportunity from 2009 until 2011 to submit their names to be sent to Mars. More than 1.2 million people from the international community participated, and their names were etched into silicon using an electron-beam machine used for fabricating micro devices at JPL, and this plaque is now installed on the deck of Curiosity.

In keeping with a 40-year tradition, a plaque with the signatures of President Barack Obama and Vice President Joe Biden was also installed. Elsewhere on the rover is the autograph of Clara Ma, the 12-year-old girl from Kansas who gave Curiosity its name in an essay contest, writing in part that "curiosity is the passion that drives us through our everyday lives."

On August 6, 2013, Curiosity audibly played "Happy Birthday to You" in honor of the one Earth year mark of its Martian landing, the first time for a song to be played on another planet. This was also the first time music was transmitted between two planets.

All content from Kiddle encyclopedia articles (including the article images and facts) can be freely used under Attribution-ShareAlike license, unless stated otherwise. Cite this article:
Curiosity rover Facts for Kids. Kiddle Encyclopedia.