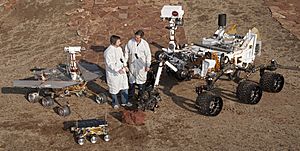 A rover is a vehicle that travels on the ground of a planet, moon, or other astronomical object. Some rovers carry people that drive them. Most are robots that can drive themselves for short distances, but humans on Earth give them directions each day about where to go and what to do. They are electric vehicles, either using solar power or nuclear power. 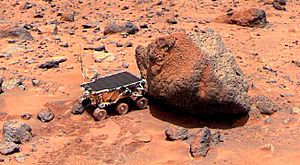 Mars - The only rovers to successfully land on Mars were sent there by NASA. They have special equipment on arms for testing the soil, taking pictures and doing other planetary science.

All content from Kiddle encyclopedia articles (including the article images and facts) can be freely used under Attribution-ShareAlike license, unless stated otherwise. Cite this article:
Rover (space exploration) Facts for Kids. Kiddle Encyclopedia.