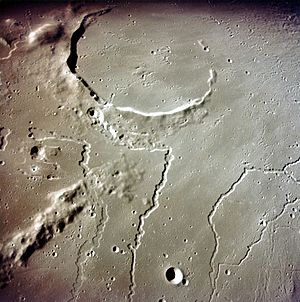 Photograph from Apollo 15 orbital unit of the rilles in the vicinity of the crater Aristarchus on the Moon.

Planetary science (or planetology) is the organized study of planets, which are relatively large, stable bodies in orbits around stars.

The planet best known to us is obviously the Earth. There are seven other major planets in the Solar System. The Solar System also has dwarf planets, such as Pluto and Ceres, the largest asteroid.

Space probes have gone near or landed on all planets in our solar system. In recent decades better telescopes have found planets in solar systems other than are own: exoplanets. One of the first was a planet found to be orbiting Barnard's star.

Planetary science is a part of astronomy and geology. It is sometimes referred to as planetary geology.

Planetary science in a broad sense includes finding a planet's orbital period and orbital distance from its star, the mineral makeup of the planet, and an attempt to learn its age. It may also have a more narrow focus, such as the mapping of the planet's surface features and the makeup of its atmosphere.

All content from Kiddle encyclopedia articles (including the article images and facts) can be freely used under Attribution-ShareAlike license, unless stated otherwise. Cite this article:
Planetary science Facts for Kids. Kiddle Encyclopedia.