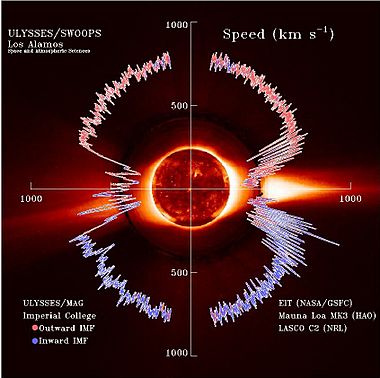 The Solar Wind is wind from the sun. It is a stream of charged protons, electrons and plasma shot out of the Sun. The wind is shot out at hypersonic speed, so fast that it can travel the whole length of the Solar System, nearly 1 light year and create the heliosphere. The particles are dangerous to astronauts and spacecraft. The Earth's magnetic field absorbs or soaks up a lot of the solar wind causing the aurora, the Northern lights and Southern lights.

A disturbance in the solar wind is called a solar storm. Sometimes it causes a geomagnetic storm. Such a storm in 1989 brought down the Quebec electric power grid putting the entire province in darkness. The largest recorded geomagnetic storm was in September 1 – 2, 1859. If we were to have another as strong as that one it is estimated it would cause up to 2 trillion dollars damage.

All content from Kiddle encyclopedia articles (including the article images and facts) can be freely used under Attribution-ShareAlike license, unless stated otherwise. Cite this article:
Solar wind Facts for Kids. Kiddle Encyclopedia.