A comet is an icy small Solar System body that, when passing close to the Sun, warms and begins to release gases, a process called outgassing. This produces a visible atmosphere or coma, and sometimes also a tail.

These phenomena are due to the effects of solar radiation and the solar wind acting upon the nucleus of the comet. Comet nuclei range from a few hundred meters to tens of kilometers across and are composed of loose collections of ice, dust, and small rocky particles. The coma may be up to 15 times the Earth's diameter. If sufficiently bright, a comet may be seen from the Earth without the aid of a telescope. Comets have been observed and recorded since ancient times by many cultures.

As of 2014 there are 5,253 known comets, a number that is steadily increasing as they are discovered. However, this represents only a tiny fraction of the total potential comet population, as the reservoir of comet-like bodies in the outer Solar System is estimated to be one trillion.

Roughly one comet per year is visible to the naked eye, though many of those are faint and unspectacular. Particularly bright examples are called "great comets". Comets have been visited by unmanned probes such as the European Space Agency's Rosetta, which became the first ever to land a robotic spacecraft on a comet, and NASA's Deep Impact, which blasted a crater on Comet Tempel 1 to study its interior. 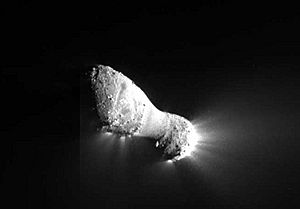 Nucleus of 103P/Hartley as imaged during a spacecraft flyby. The nucleus is about 2 km in length 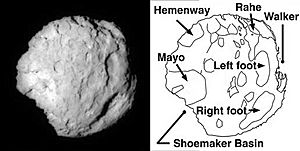 Comet 81P/Wild exhibits jets on light side and dark side, stark relief, and is dry

The solid, core structure of a comet is known as the nucleus. Cometary nuclei are composed of an amalgamation of rock, dust, water ice, and frozen gases such as carbon dioxide, carbon monoxide, methane, and ammonia. As such, they are popularly described as "dirty snowballs".

However, some comets may have a higher dust content, leading them to be called "icy dirtballs". Research conducted in 2014 suggests that comets are like "deep fried ice cream", in that their surfaces are formed of dense crystalline ice mixed with organic compounds, while the interior ice is colder and less dense. 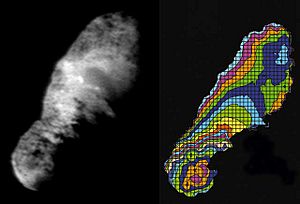 Comet Borrelly exhibits jets, but has no surface ice

The surface of the nucleus is generally dry, dusty or rocky, suggesting that the ices are hidden beneath a surface crust several metres thick. In addition to the gases already mentioned, the nuclei contain a variety of organic compounds, which may include methanol, hydrogen cyanide, formaldehyde, ethanol, and ethane and perhaps more complex molecules.

In 2009, it was confirmed that the amino acid glycine had been found in the comet dust recovered by NASA's Stardust mission. In August 2011, a report, based on NASA studies of meteorites found on Earth, was published suggesting DNA and RNA components (adenine, guanine, and related organic molecules) may have been formed on asteroids and comets.

The outer surfaces of cometary nuclei have a very low albedo, making them among the least reflective objects found in the Solar System. The Giotto space probe found that the nucleus of Halley's Comet reflects about four percent of the light that falls on it, by comparison, asphalt reflects seven percent.

Most comets are small Solar System bodies with elongated elliptical orbits that take them close to the Sun for a part of their orbit and then out into the further reaches of the Solar System for the remainder. Comets are often classified according to the length of their orbital periods: The longer the period the more elongated the ellipse. 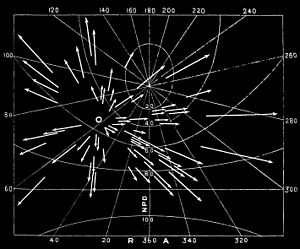 As a result of outgassing, comets leave in their wake a trail of solid debris too large to be swept away by radiation pressure and the solar wind. If the Earth's orbit sends it though that debris, there are likely to be meteor showers as Earth passes through. The Perseid meteor shower, for example, occurs every year between 9 and 13 August, when Earth passes through the orbit of Comet Swift–Tuttle. Halley's Comet is the source of the Orionid shower in October.

Comets and impact on life

Many comets and asteroids collided with Earth in its early stages. Many scientists think that comets bombarding the young Earth about 4 billion years ago brought the vast quantities of water that now fill the Earth's oceans, or at least a significant portion of it.

The detection of organic molecules, including polycyclic aromatic hydrocarbons, in significant quantities in comets has led to speculation that comets or meteorites may have brought the precursors of life—or even life itself—to Earth.

It is suspected that comet impacts have, over long timescales, also delivered significant quantities of water to the Earth's Moon, some of which may have survived as lunar ice.

A comet may be discovered photographically using a wide-field telescope or visually with binoculars. However, even without access to optical equipment, it is still possible for the amateur astronomer to discover a sungrazing comet online by downloading images accumulated by some satellite observatories such as SOHO. SOHO's 2000th comet was discovered by Polish amateur astronomer Michał Kusiak on 26 December 2010 and both discoverers of Hale-Bopp used amateur equipment (although Hale was not an amateur).

In old times, people used to be scared of comets. They did not know what they were, or where they came from. Some thought that they were fireballs sent from demons or gods to destroy the earth. They said that each time a comet appeared, it would bring bad luck with it.

Edmond Halley reasoned that some comets are periodic, that is, they appear again after a certain number of years, and again and again. This led to the first prediction of a comet's return, Halley's Comet, named after him.

Isaac Newton also studied comets. He realised that comets make U-turns around the sun. He asked his friend Edmond Halley to publish this in his book Philosophiae Naturalis Principia Mathematica. Before Newton said this, people believed that comets go in to the sun, then another comes out from behind the sun.

All this new information and research gave people confidence, but some still thought that comets were messengers from the gods.

In modern times space probes have visited comets to learn more about them.

All content from Kiddle encyclopedia articles (including the article images and facts) can be freely used under Attribution-ShareAlike license, unless stated otherwise. Cite this article:
Comet Facts for Kids. Kiddle Encyclopedia.