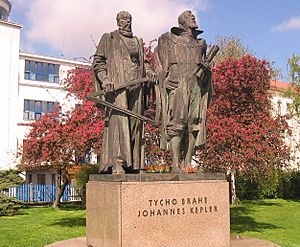 Monument of Tycho Brahe and Johannes Kepler in Prague

Tycho Brahe (14 December 1546 — 24 October 1601) was an astronomer from Denmark. He observed the night sky before the invention of the telescope. He built a large observatory called Uraniborg on the island of Hven in Denmark.

He discovered that the universe outside the Solar System could change when he studied a supernova and a comet. Johannes Kepler was his assistant. Tycho made very careful observations of the planets. When Tycho died in 1601, Kepler continued Tycho's work.

Tycho was not a modern scientist. He believed in astrology, and his astronomy was a strange mixture of scientific observation and religious belief. Although he rejected the Ptolemaic system, he also rejected the Copernican system. He developed a geocentric theory that imagined the Sun and Moon orbited the Earth, but the other planets orbited the Sun.

Unlike most astronomers of his time, he did not believe in the unchanging celestial realm or spheres. Tycho's Nova, now called SN 1572,proved that changes did take place. Also, he worked out that comets were real celestial objects, and that their orbits were different to those of the planets.

All content from Kiddle encyclopedia articles (including the article images and facts) can be freely used under Attribution-ShareAlike license, unless stated otherwise. Cite this article:
Tycho Brahe Facts for Kids. Kiddle Encyclopedia.