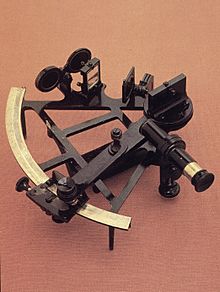 A sextant is an object used for navigation which measures angles. The user is able to measure the angle between the horizon and an object in the sky, such as the sun, a star, or a planet. It originally could measure angles up to 60°, which was one sixth of a circle. This is how it got its name from the Latin word sextus (six). It helps work out positions of latitude and longitude.

All content from Kiddle encyclopedia articles (including the article images and facts) can be freely used under Attribution-ShareAlike license, unless stated otherwise. Cite this article:
Sextant Facts for Kids. Kiddle Encyclopedia.