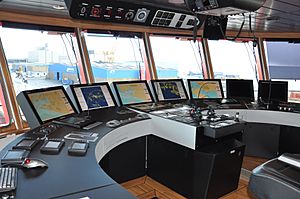 Navigation is how ships or aircraft find their way from one place to another. The word navigation came from the word "navgatih" from the Sanskrit language. The Latin word navis means ship; navigation is literally "art of ship mastery". The word is also used as a metaphor for 'finding one's way'. Today it also means knowing where to go when traveling.

One type of navigation was made by the Polynesians and is called Polynesian navigation. Polynesians used different things found all around them to find their way across large areas of open ocean. Other early people also learned how to travel large distances using the natural world. For example:

An example of people who used the stars were the Vikings. They knew that the star called Polaris (the North Star) does not change location and points to the north. They would then know the latitude (distance from the equator), by measuring the angle between Polaris and the horizon. They also used animals, especially birds, to know if land was nearby. They also knew that specific kind of clouds form near land and that waves are different near land than at high seas.

As time went by better methods of navigation were invented or discovered. Some of these methods are: 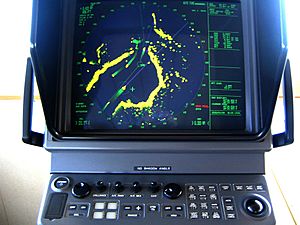 Radar ranges and bearings can be very useful navigation.

All content from Kiddle encyclopedia articles (including the article images and facts) can be freely used under Attribution-ShareAlike license, unless stated otherwise. Cite this article:
Navigation Facts for Kids. Kiddle Encyclopedia.