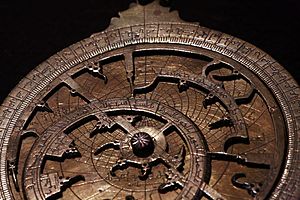 An astrolabe from the 16th century

The astrolabe is a tool using the positions of the stars or sun. It was formerly used in navigation to help explorers and sailors figure out where they were. They found their distance north and south of the equator by measuring the distance of the sun and stars above the horizon. Astronomers used other kinds of astrolabes, usually larger ones.

An early astrolabe was made in the Hellenistic world in 150 BC. It is often attributed to Hipparchus. The astrolabe was a marriage of the planisphere (a star chart analog computing instrument) and dioptra (a tool to measure angles). It was a calculator able to work out many kinds of problems in astronomy. Theon of Alexandria wrote a complex book on the astrolabe. Lewis says that Ptolemy used an astrolabe to make the astronomical observations recorded in the Tetrabiblos.

All content from Kiddle encyclopedia articles (including the article images and facts) can be freely used under Attribution-ShareAlike license, unless stated otherwise. Cite this article:
Astrolabe Facts for Kids. Kiddle Encyclopedia.