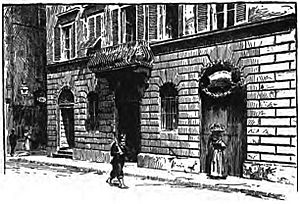 Amerigo Vespucci (9 March 1454 - 22 February 1512) was an Italian merchant, explorer and cartographer. He was the first person to explain that the New World discovered by Christopher Columbus in 1492 was not the eastern area of Asia, but an unknown continent (the Americas).

Referred to as the New World, in 1507 this second super continent was named America, its name coming from Americus, which is the Latin version of Vespucci's first name.

Amerigo traveled to the New World in 1499 landing in the northeastern portion of South America and voyaged again in 1502.

While on one of his voyages, Vespucci wrote two letters to a friend in Europe. He described his travels and was the first to identify the New World of North and South America as separate from Asia. (Columbus thought he had reached Asia to the day he died.)

Amerigo Vespucci also described the culture of the indigenous people, and focused on their diet, their religion, marriage, and childbirth practices. The letters were published in many languages and were distributed across Europe, selling much better than Columbus' diaries.

Vespucci spent his final years in Spain where he ran a school for navigators. 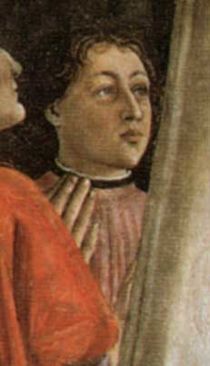 Portrait of Amerigo Vespucci as a child, part of the Madonna della Misericordia (c. 1472) by Domenico Ghirlandaio at the Ognissanti church in Florence

The first and fourth voyages are perhaps fabricated, but the second and third are certain.

A letter published in 1504 purports to be an account by Vespucci, written to Soderini, of a lengthy visit to the New World, leaving Spain in May 1497 and returning in October 1498. However, modern scholars have doubted that this voyage took place, and consider this letter a forgery. Whoever did write the letter makes several observations of native customs, including use of hammocks and sweat lodges.

About 1499–1500, Vespucci joined an expedition in the service of Spain, with Alonso de Ojeda (or Hojeda) as the fleet commander. The intention was to sail around the southern end of the African mainland into the Indian Ocean. After hitting land at the coast of what is now Guyana, the two seem to have separated. Vespucci sailed southward, discovering the mouth of the Amazon River and reaching 6°S, before turning around and seeing Trinidad and the Orinoco River and returning to Spain by way of Hispaniola. The letter, to Lorenzo di Pierfrancesco de' Medici, claims that Vespucci determined his longitude celestially

on August 23, 1499, while on this voyage. However, that claim may be fraudulent, which could cast doubt on the letter's credibility. 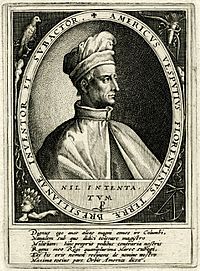 Portrait engraving of Vespucci by Crispijn van de Passe, which titles him "discoverer and conqueror of Brazilian land"

The last certain voyage of Vespucci was led by Gonçalo Coelho in 1501–1502 in the service of Portugal. Departing from Lisbon, the fleet sailed first to Cape Verde where they met two of Pedro Álvares Cabral's ships returning from India. In a letter from Cape Verde, Vespucci says that he hopes to visit the same lands that Álvares Cabral had explored, suggesting that the intention is to sail west to Asia, as on the 1499–1500 voyage. On reaching the coast of Brazil, they sailed south along the coast of South America to Rio de Janeiro's bay. If his own account is to be believed, he reached the latitude of Patagonia before turning back, although this also seems doubtful, since his account does not mention the broad estuary of the Río de la Plata, which he must have seen if he had gotten that far south. Portuguese maps of South America, created after the voyage of Coelho and Vespucci, do not show any land south of present-day Cananéia at 25° S, so this may represent the southernmost extent of their voyages.

After the first half of the expedition, Vespucci mapped Alpha and Beta Centauri, as well as the constellation Crux, the Southern Cross and the Coalsack Nebula. Although these stars had been known to the ancient Greeks, gradual precession had lowered them below the European horizon so that they had been forgotten. On his return to Lisbon, Vespucci wrote in a letter to Medici that the land masses they explored were much larger than anticipated and different from the Asia described by Ptolemy or Marco Polo and therefore, must be a New World, that is, a previously unknown fourth continent, after Europe, Asia, and Africa. 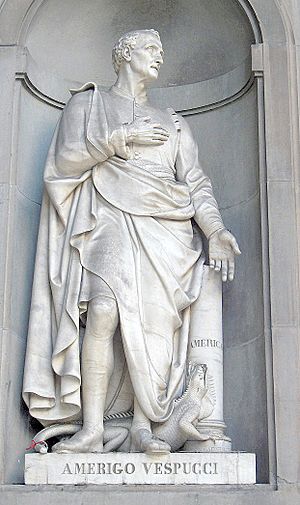 Vespucci statue at the Uffizi, Florence

Vespucci's fourth voyage was another expedition for the Portuguese crown down the eastern coast of Brazil, that set out in May 1503 and returned to Portugal in June 1504. Like his alleged first voyage, Vespucci's last voyage in 1503–1504 is also disputed to have taken place. The only source of information for the last voyage is the Letter to Soderini, but as several modern scholars dispute Vespucci's authorship of the letter to Soderini, it is also sometimes doubted whether Vespucci undertook this trip. However, Portuguese documents do confirm a voyage to Brazil was undertaken in 1503–04 by the captain Gonçalo Coelho, very likely the same captain of the 1501 mapping expedition (Vespucci's third voyage), and so it is quite possible that Vespucci went on board this one as well. However, it is not independently confirmed Vespucci was aboard and there are some difficulties in the reported dates and details.

The letters caused controversy after Vespucci's death, especially among the supporters of Columbus who believed Columbus' priority for the discovery of America was being undermined, and seriously damaged Vespucci's reputation.

All content from Kiddle encyclopedia articles (including the article images and facts) can be freely used under Attribution-ShareAlike license, unless stated otherwise. Cite this article:
Amerigo Vespucci Facts for Kids. Kiddle Encyclopedia.